The Theory of Everything by Kari Luna 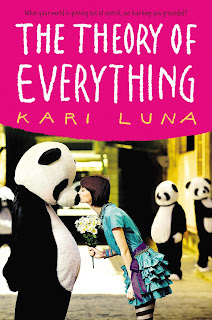 Sophie Sophia can see things that other people can't. Well, asides from her dad who also has episodes where he travels and comes back with souvenirs. Travels as in sees crazy things. What sort of crazy things? Well, shaman pandas for starters. But her mother thinks Sophie might need to see a psychiatrist and the only other person who can understand what Sophie is going through--her father--is missing.

I feel like The Theory of Everything would make a great movie. There, I said it. Why? Because it's magical realism and if you decide to read it, it'll be hard not to see why this would translate so well to the screen. Sophie is an eccentric main character who is once again the new girl at a new school; she makes friends with Finny, a boy obsessed with science and physics, and he ends up helping her on her journey to better understand what causes her to travel. There's also mix tapes, music video-like episodes, a (music) band of panda bears, and a journey to New York City for answers.

However, I feel like I have to point this out: I feel like I would've liked to have closure when it came to her father. That was probably the one thing that bothered me and when you get to the end of The Theory of Everything, I'm pretty sure you'll understand what I mean. I really don't want to say anymore than that because, well, spoilers.

In all, the plot kept a steady pace and it was fun to see how Sophie handled things. I would point out--again--that this is more magical realism than anything and it does make for a very interesting read. If you've been thinking about giving The Theory of Everything a whirl, definitely go for it!


The Theory of Everything by Kari Luna
Publisher: Philomel, an imprint at Penguin Group
Release Date: July 11, 2013
Edition: e-ARC
Received for review via NetGalley and publisher.

Posted by Kristin @ Beneath Shining Stars at 3:48 AM