Siege and Storm by Leigh Bardugo 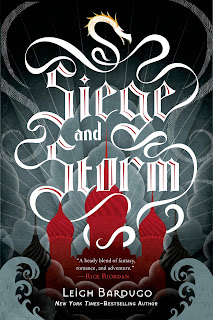 If you haven't read Shadow and Bone yet, this would be the time to stop reading.

The short version? If you've read Shadow and Bone you definitely want to pick up a copy of Siege and Storm.

It's easy to fall back into Alina's world and despite there being a decent amount of traveling, it's not hard to keep up. Did I mention that there's plenty of action too? Because Siege and Storm definitely doesn't disappoint on that front. You'll already be familiar with most of the characters in Siege and Storm but you'll also get to meet a few new ones--perhaps most importantly, Sturmhond.

Honestly, if I were going to have to give you a reason to read Siege and Storm? Sturmhond would rank very, very high on the list of reasons. He's charming, adapts to the situation at hand, and you'll have to read Siege and Storm to see why I like him so much. No, really. I can't say anymore than that (and if you've read Siege and Storm already, well, you know why). On top of that, you'll get a healthy dose of Mal and the Darkling. Regardless of who you like? Well, prepare yourself.

Then there's Alina, who is haunted by what the Darkling told her and struggles to find a balance between being herself and what she needs to be for Ravka's sake. At least, that's how I'd put it. But that's all that I'm going to allow myself to tell you about Siege and Storm. There's no awkward middle book syndrome going on and the ending sets us up perfectly for Ruin and Rising which seems like it's going to be epic. (I can sense it.)

I know I'm really not touching on the plot for Siege and Storm but it definitely delivers. I just really don't want to give anything away. Not even on accident.

So there you have it! Definitely do get your hands on Siege and Storm if you haven't already; I promise you, you won't be disappointed. (You will be dying for Ruin and Rising though.)


Siege and Storm by Leigh Bardugo
Publisher: Henry Holt & Co., a part of Macmillan.
Release Date: June 4, 2013
Edition: e-ARC
Received for review via NetGalley.
Posted by Kristin @ Beneath Shining Stars at 6:08 AM