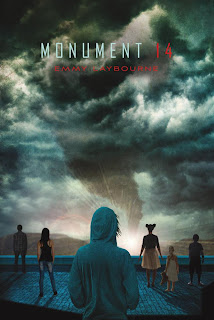 Imagine a horrific disaster, one that cases volcanic explosions, huge earthquakes not located near major faults, and hail that can--and will--kill you if you stay out in it for too long. That, is the world in which Dean and thirteen other students have been tossed.

Monument 14 focuses heavily on the group of students that have taken refuge in what I'm assuming is a local superstore and although they do get some information as to what's going on outside, for the most part, they're very, very secluded. It really focuses on how people change when they're tossed into that sort of situation and the problems that arise when you're stuck with the same bunch of people for an extended period of time--in particular, people that you didn't fit in with at school.

Dean is our main character and all of Monument 14 is told from his point of view; he's a writer and although I can't say that he felt particularly valiant to me, he seemed like a pretty good guy. Then there's Brayden and Jake, two football players from Dean's high school, and Astrid, who Dean has a crush on. But I think that for the most part, the little kids are the ones who really stole the show. Why? Because one comes from an extremely religious family, another always has crazy stories to tell because his life crazy, and a thirteen year old girl who is at the point where she wants to be treated like an adult. That's actually not all of the characters, but those are the ones that really stood out to me.

As for the disastrous events? They were pretty crazy; however, I will admit that I wasn't thrilled about the chemical spill and the effects that it had. It felt--to me--like it could've been more than it was (if that makes any sense). Also, I think I would've liked an epilogue in this particular case; I really feel like it would've helped the ending feel more complete--I really can't say more than that about the ending and once you reach it, you'll see why.

In all, I definitely liked Monument 14 although I think I would've preferred a little more action. Would I recommend it to you? If you're interested in reading it, yes.