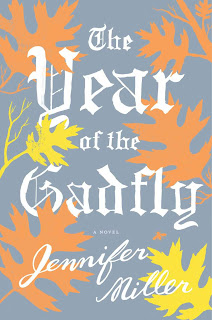 The Year of the Gadfly by Jennifer Miller

Summary via Goodreads:
Mariana Academy is a storied institution, built with gothic architecture, founded with a serious honor code and, for the most part, run by its students. But Prisom's Party, a secret society named after the school's founder, has been troubling these quiet halls, naming the student community code an empty motto—Brotherhood, Truth, and Equality for All—and exposing teachers, students, and the school for every indiscretion or dishonesty.

Taken by her parents from the familiar environs of Beacon Hill in Boston to escape the loss of her best friend, Iris Dupont is now living in small-town Nye, Massachusetts, and attending the hyper-competitive Mariana. Her only confidant is a chain-smoking, challenge-wielding spectre named Edward R. Murrow and when he tells her to stop moping and get out there in search of a story, she takes the charge.

Now Iris is on the hunt for a great story, one that will make her the youngest editor-in-chief in the school newspaper's history, but her research is leading her deep into the Trench (the school basement), toward the staff of  The Devil's Advocate (the underground news organ of Prisom's Party), and to discovering all the secrets they both hold. Some of them seem to involve her favorite teacher, Mr. Kaplan. Some of them seem to point to the girl who used to live in her house—an albino named Lily Morgan who left the school abruptly twelve years ago and seems to have never returned. And everything seems to be connected to a rare book she found in her borrowed room, Marvelous Species: Investigating Earth’s Mysterious Biology.

Was all of this triggered by the string of incidents that set the school on high alert? Does it trace back to a scandal Mr. Kaplan is hiding in his past? What is the meaning of the strange symbol that keeps showing up in the wake of the Prisom's Party incidents? And when Iris gets deep into the story, torn by her allegiances, her reporter's instinct, and her yearning for a true friend, will it be enough for her to ask: What would Edward Murrow do?

-----
Gorgeous cover? Check. Academy setting? Check. Secret society? Check. In short, it seems like The Year of the Gadfly is packed full of things that I tend to enjoy and I'm definitely looking forward to its release!

The Year of the Gadfly by Jennifer Miller is published by Houghton Mifflin Harcourt and its expected publication date is May 8, 2012.
-
Posted by Kristin @ Beneath Shining Stars at 9:08 PM