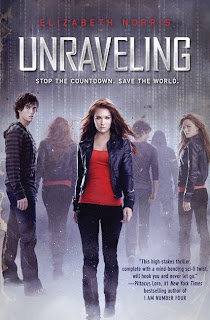 Don't ask me to summarize Unraveling for you, I'm pretty sure I can't do it. However, I will tell you that Unraveling is an absolutely crazy ride and that I ended up loving it. Also, if you're sensitive to profane language, I will warn you that there is some in Unraveling. Personally, this doesn't bother me at all--but then again, when I was younger, I had quite the mouth (not anymore though).

Janelle has been holding her family together for a while now--seeing as how her dad works at the FBI office in San Diego and her mother usually isn't stable enough to be much help--and I love how strong she was. And Alex certainly helps her hold things together as well--they've been friends for quite some time and he's always there when she needs him. Then there's Ben, the boy that Janelle sees when she first comes to after her accident. He's definitely mysterious and there's more to him than meets the eye--actually, there's a lot about him that's quite interesting, but you'll have to read about that as I refuse to spoil it for you. Alright, I also loved Janelle's father--who seems like an awesome guy--and her younger brother, Jared--who happens to play a lot of World of Warcraft (which I tend to play as well). Admittedly I wasn't completely in love with Barclay at first, but he definitely grew on me--despite his pain in the butt attitude at first.

Maybe it's just me, but with the chapter lengths being on the short side, Unraveling felt like it was longer than it actually was--if that makes any sense. I kept thinking I was farther in the book than I actually was--which is why, when I reached the end, I seriously thought it was a standalone and started to freak out for a moment because of the ending. That would've been a perfect ending in its own way, but I'm just so relieved that there's going to be another book. If you couldn't tell by all of that, I really loved the pacing because even though it seems like you're farther than you actually are, it still continues to build until you reach the end. There were, as I mentioned before, things that I just really didn't see coming and I loved that about Unraveling; there's also definitely some romance in Unraveling and yes, it can be a bit steamy at times, but it doesn't completely overwhelm the plot--at least, I certainly didn't think so.

There is so much that I wish I could tell you about Unraveling but if I were to tell you these things, I'd be spoiling a fair bit of the book for you--which is why I didn't even write my usual summary in this review. If you're thinking about picking up a copy, definitely do so and I hope that you love it as much as I did! (Also, I'm not entirely sure what to classify this as, but it seems like science fiction--but don't worry, it's not difficult to follow.)

Favorite Quote:
It looks like he might be getting ready to manipulate the floor so it will swallow him whole and get him out of here.