A Lesson in Secrets by Jacqueline Winspear 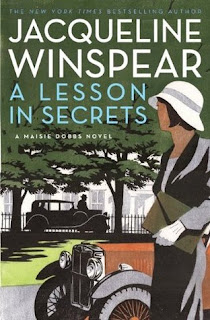 Summary from GoodReads: In the summer of 1932, Maisie Dobbs’ career goes in an exciting new direction when she accepts an undercover assignment directed by Scotland Yard’s Special Branch and the Secret Service. Posing as a junior lecturer, she is sent to a private college in Cambridge to monitor any activities “not in the interests of His Majesty’s Government.”

When the college’s controversial pacifist founder and principal, Greville Liddicote, is murdered, Maisie is directed to stand back as Detective Chief Superintendent Robert MacFarlane and Detective Chief Inspector Stratton spearhead the investigation. She soon discovers, however, that the circumstances of Liddicote’s death appear inextricably linked to the suspicious comings and goings of faculty and students under her surveillance.

To unravel this web, Maisie must overcome a reluctant Secret Service, discover shameful hidden truths about Britain’s conduct during the war, and face off against the rising powers of the Nationalsozialistische Deutsche Arbeiterpartei—the Nazi Party—in Britain.

A pivotal chapter in the life of Maisie Dobbs, A Lesson In Secrets marks the beginning of her intelligence work for the Crown. As the storm clouds of World War II gather on the horizon, Maisie will confront new challenges and new enemies—and will engage new readers and loyal fans of this bestselling mystery series.


By now you know of my love for historical fictions and my penchant for mysteries as well as the fact that on occasion, I wander outside of my comfort zone (YA). With that being said, I was a bit worried about jumping into the world of Maisie Dobbs as this is the eighth book in the series. I know, I know, usually it's a terrible place to begin reading a series but in this particular case, I was pleasantly surprised. The character relationships are well developed and as you dive into Maisie's world, you'll uncover character relations with relative ease. However, if you're looking for a mystery with a heavy helping of romance, this isn't it. Now that isn't to say that there aren't any romantic relationships in A Lesson in Secrets, but that they play a minor role in this particular installment of the series.

Set in between WWI and WWII, A Lesson in Secrets will immerse you within the time period, just as Hitler's Nazi party begins its rise. Maisie Dobbs has been sent to Cambridge undercover as a professor to keep her eyes open to spot possible enemies of the Crown or things that aren't in its best interest. Along the way she'll help a friend uncover her husband's murderer, unearth secrets of the seemingly peaceful college, and discover the man responsible for a death on campus (as well as his motive). It won't be an easy task, but that's precisely why Maisie has taken it on.

A Lesson in Secrets isn't precisely a speedy read; you'll want to devote some time to it as it is detailed and personally I felt like it's the sort of book that you want to read at a leisurely pace. With that being said, if the summary has piqued your interest and you're a fan of historical fictions as well as mysteries, I'd suggest giving the Maisie Dobbs series a go--although perhaps you might prefer to start with the first book in the series (entitled Maisie Dobbs). Jump on in, the water's fine!