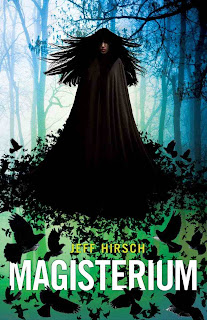 Summary via Goodreads:
On one side of the Rift is a technological paradise without famine or want. On the other side is a mystery.

Sixteen-year-old Glenn Morgan has lived next to the Rift her entire life and has no idea of what might be on the other side of it. Glenn's only friend, Kevin, insists the fence holds back a world of monsters and witchcraft, but magic isn't for Glenn. She has enough problems with reality: Glenn's mother disappeared when she was six, and soon after, she lost her scientist father to his all-consuming work on the mysterious Project. Glenn buries herself in her studies and dreams about the day she can escape. But when her father's work leads to his arrest, he gives Glenn a simple metal bracelet that will send Glenn and Kevin on the run---with only one place to go.
With MAGISTERIUM, Jeff Hirsch brings us the story of a complex, captivating world that will leave readers breathless until the very last page.


-----
Why am I waiting on Magisterium? Because the summary sounds amazing--of course. I'm looking forward to finding out more about the Rift and about Glenn's world in general.

Magisterium by Jeff Hirsch is published by Scholastic Press, a part of Scholastic, and its expected publication date--from what I can tell--isn't available, although it looks like it'll be out sometime in October 2012.

So, what are you waiting on this week?
--
Posted by Kristin @ Beneath Shining Stars at 9:08 PM