Kill Me Softly by Sarah Cross 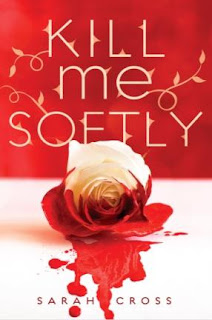 Are you a fan of fairy tales? Or perhaps a little show called Once Upon a Time? Then this is a book you might want to get your hands on.

Mira's sixteenth birthday is just around the corner and there's nothing that she wants more than to return to Beau Rivage, the city where her parents' bodies reside. It also happens to be the one place that her godmothers have forbidden her to go; which is precisely why she sneaks away at night. Beau Rivage isn't like most cities and it's there, amongst its unusual residents, that Mira will uncover the answers to her questions and much, much more.

If this is a standalone, I will admit that I'm going to be flipping a table--figuratively, of course. There are a few loose ends that haven't been tied up and it's going to drive me crazy if they don't get tied up. Having said that, I really did enjoy Kill Me Softly! I think the thing that I loved most about it was that more than one person can bear the same curse. And well, there's the fairies who are definitely a big part of why people get cursed, although you won't see them too frequently in Kill Me Softly. Also, if you're not too well versed in fairy tales, you might want to brush up on them a little before reading Kill Me Softly. Most of them are easy enough to guess--with little nods to Disney here and there (although they're also rather true to the actual fairy tales and not the PG Disney version).

Mira can be a bit difficult--in particular if you're Freddie--but it's definitely understandable. She's finally out from under her godmother's watchful eye and I don't think anyone wants their destiny planned for them to the extent that the Somnolents do. Although that's not to say that any of the other cursed have it any easier. I can't really go into the other characters as I don't want to give them away--but I will say that Freddie is definitely an innocent and a romantic (although not a Romantic, thankfully). And well, then there's Blue and Felix Valentine; with my particular penchant for the bad boy (in books, not real life), I did quite like Felix. Having said that though, Blue definitely grew on me. In all, I really do hope that we'll be seeing more of everyone in another book.

Overall, Beau Rivage seems like a gorgeous place with unusual residents. If you're a fan of fairy tales, then I'd recommend Kill Me Softly to you and perhaps even if you aren't that fond of fairy tales.