172 Hours on the Moon by Johan Harstad 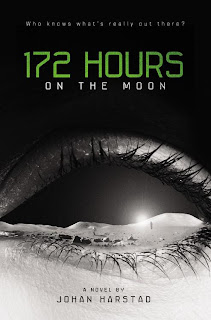 NASA has decided to host a contest, one which will allow three teens to travel to the moon--where they will stay for a week (supervised by five adults) on DARLAH 2, a base built on the moon in the early seventies. However, they've neglected to mention the fact that there's a very good reason why no one has set foot on the moon in recent years and the crew of eight will find this out first hand. And then the question becomes this: will they make it back alive?

The first half of the book is everything leading up to the actual trip which means that you'll meet the teens and you'll also get to read a bit about Mr. Himmelfarb--who knows about DARLAH 2 and what went on the last time someone went to the moon, although his memory isn't what it used to be. If I'm being honest, I didn't really feel a connection with any of the teens, but I think it's because--although it's written in third person--it kept switching between the three of them and it felt like it didn't give them enough time to, well, really feel like people to me.

There's Mia, whose parents put her name into the drawing and at first, she really doesn't want to go. After all, she lives in Norway and she's really attached to her band, Rogue Squadron; but at the same time, it's really her band mates that convince her to go--mainly because they feel it'd be good publicity for their band. Midori lives in Japan and she spends quite a bit of time hanging out with an eccentric crowd--and spends most of her money on clothes; she put her name into the drawing because she wants to get out of Japan and see more of the world. And lastly, there's Antoine, the only boy in the group. He lives in Paris and honestly? I didn't like him too much--mainly because he sort of peeped in on his ex-girlfriend and her new boyfriend via a telescope/binoculars on the Eiffel Tower (if I'm remembering correctly). He decides that he wants to go and that, afterwards, he wouldn't care less about his ex-girlfriend.

The real action starts in the second half and when it gets going, it really gets going. I'd almost say that it starts too quickly; I'd have liked it more--I think--if they'd had more time to get settled at DARLAH 2 before it started. But at that point, things get really interesting and maybe I shouldn't have read it while I had on a paranormal show in the background... at night. The other really neat thing about 172 Hours on the Moon is that there are images every now and then of the base, its layout, the moon, and so forth. I think that it definitely helped me imagine how Johan Harstad envisioned things.

Admittedly there were a few things that--to me--seemed a little far fetched but if you can get past that, it's definitely an interesting read--one that did indeed creep me out. It's a book that seems like something that you'd like to read, don't let my review discourage you! I really did end up liking it in the end and should you choose to read it, I hope that you enjoy it too!