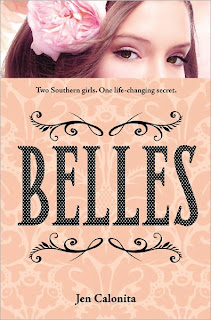 Izzie's life as been anything but simple. She lives with her grandmother--whose condition isn't always as stable as it should be--and works so that they have money; but it's what her life and one that she doesn't want to give up. Unfortunately, her social worker, Barbara and her grandmother have been planning something that will change Izzie's life forever. Suddenly she's moving to Emerald Cove--which is the exact opposite of Harborside--to live with her uncle (a state senator) and his family. And it's there, in Emerald Cove and at Emerald Prep that Izzie will truly have to fight to fit in--and there are a few residents who will do anything they can to sabotage her.

So, I did like Isabelle (Izzie) better than Mirabelle (Mira) in Belles. Why? Because unlike Mira, Izzie is well and truly determined to remain true to herself and when she's challenged, she'll do everything she can to meet it and rise above it. Also, she's still modest despite everything--she really wants to do good (both with her new family and at school). On the other hand, you have Mira who really seems to get stepped on by both Savannah (her 'best' friend) and her boyfriend as well. On the upside, Mira really starts to speak up for herself towards the end and I'm hoping that she continues to improve in Winter White. Then there's Brayden who is really growing on me; he knew Izzie before she moved to Emerald Cove and well, he's a nice guy--you'll see what I mean. I also really liked Hayden, Mira's older brother, who Izzie feels that she can talk to. And yes, it's a bit confusing at times to have one boy named Brayden and another named Hayden--there were a few moments when I had to look at my notes to remember who was who.

There are definitely some not-so-great decisions made in Belles by Mira and Izzie that were a bit difficult for me to read--mainly because I like it best when characters stand up for themselves--but one has to expect some cattiness when it comes to the rich. (Gossip Girl, anyone?) Also, it does start off a little slow for my tastes, but things definitely start to pick up once Izzie gets to her uncle's house--and it alternates between what Izzie is up to and what Mira is up to although it's written in third person. Having said that, I really did end up enjoying Belles and I'm definitely going to be looking forward to Winter White later this year! If you're a fan of Gossip Girl, then I'd recommend this to you (or if you like books along those lines).