In My Mailbox is a weekly meme hosted by Kristi (The Story Siren) and it allows book lovers to show what they've gotten over the week. It can be books bought, borrowed, received for review, etc. 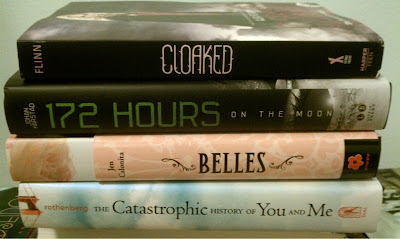 Won:
Cloaked by Alex Flinn
I actually won this through a giveaway that Pitch Dark Books was doing on Twitter! I haven't had the time to read it yet, but I'm definitely looking forward to it!

Belles by Jen Calonita
Received for review from Little, Brown Books for Young Readers. I've actually finished reading Belles a while ago and my review will be going up for it soon--but meanwhile, I'll tell you that I liked it and that there are definitely some Gossip Girl-ish moments in Belles.

Bought:
The Catastrophic History of You and Me by Jess Rothenberg
This is one of--the many--books that I've been meaning to pick up to read and although I haven't gotten around to reading it just yet, I have high hopes for this one!

Not pictured (for review):
Once by Anna Carey
Received for review from HarperCollins and Edelweiss. I really enjoyed Eve and when I was that this was up on Edelweiss, well, I had to request it! I'm definitely looking forward to reading it--but I'm trying to wait until I've finished a few more reviews before I reward myself with it.

Drain You by M. Beth Bloom
Received for review from HarperTeen and Edelweiss. Why hello there, book with zombies in it! I certainly can't wait to dive right on in to Drain You and this will probably be the next book that I read.

Insignia by S.J. Kincaid
Received for review from Katherine Tegen Books and Edelweiss. Maybe it's just me, but this sounds different than your usual dystopian and the main character is a guy--which might not seem like much, but I'm someone who rarely picks up books written from the male perspective--so I'm hoping that I'll really enjoy it!

Something Strange and Deadly by Susan Dennard
Received for review from HarperTeen. I've been wanting to request this title even before I knew that it was up on Edelweiss--mainly because yes, I want to read it that badly. This is probably going to be one of those titles that I read in one sitting--or so I hope!
--
Posted by Kristin @ Beneath Shining Stars at 9:34 PM