The Book of Blood and Shadow by Robin Wasserman 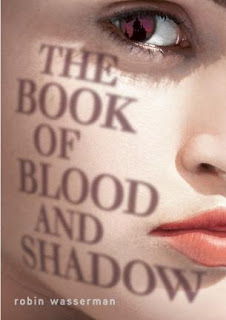 I'm at a loss for words right now, but I'll tell you this: if you like standalone books and you like mysteries (and thrillers), this is definitely a book that you'll want to check out. The main character, Nora, has no idea what she's getting herself into when she begins to translate Elizabeth Weston's letters and the result leaves one of her--very few--friends dead and it also sends them across the Atlantic to Prague as Nora is guided to the Lumen Dei via Elizabeth's letters.

I really loved how all of the characters developed and that--as you see them through Nora's eyes--there's more to them then you might expect. And as for Nora, well, she can be gullible and she's had it rough--after her brother's death--but she's definitely bearable. Then there's Chris who is pretty darn funny and who is always there for Nora as well as Adriane, the girl that Chris is dating. Adriane, at first glance, seems like she's just a pretty girl who happens to hang out with the geeks, but in truth, she's pretty smart as well--although she's not interested in Latin like Nora and Chris are. Did I mention that? Latin--yes, the language--plays a huge role in The Book of Blood and Shadow. It's the language that all of the letters are in and Nora was introduced to Latin by her father who definitely taught her quite a bit. However, after the death of Andy (Nora's brother), her parents really don't interact with her as they're still coping with his death--even though it's been a while. I could tell you about Max and Eli, but if you read The Book of Blood and Shadow, you'll know why I'm not going to go into detail about them in my review--spoilers.

Favorite Quote:
"She inspired you to poetry," I pointed out.
"So do spotted toads. And the occasional well-barbequed steak. Beauty's not really a necessary criterion."


The Book of Blood and Shadow by Robin Wasserman
Publisher: Knopf Books for Young Readers, a part of Random House
Release Date: April 10, 2012
Edition: e-ARC
* Received for review via publisher and NetGalley.
Posted by Kristin @ Beneath Shining Stars at 3:55 AM