The Night She Disappeared by April Henry 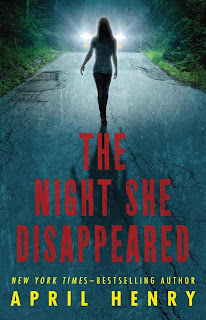 There are several points of view in The Night She Disappeared and admittedly, that always makes reading a bit difficult for me--it's rare to see me pick up a book with more than two points of view. You have the following points of view: Gabie, Drew, the kidnapper, and Kayla's. There are also articles about Kayla's disappearance and transcripts for a talk show and a radio show. And yes, it's a lot to take in. However, if you're able to get about seventy-five pages in, I do feel that the story improves--although I think I would've liked it if it had been told completely in third person and if the pacing had been a bit quicker as well.

Told mainly from Gabie and Drew's perspectives, The Night She Disappeared tells of Kayla's disappearance and the effect that it has on those that worked with her, went to school with her, and everything that is done in an effort to locate her--or her body. Gabie feels like she should've been the one abducted; after all, if the man who called asked to see if she was delivering that night. Drew on the other hand feels like he's somehow responsible; he's the one who was working with Kayla that night and he's the one who took the order from the man to begin with. Both of them feel guilty for Kayla's disappearance and Gabie feels like Kayla might still be out there, alive, but even if that's true, she's probably running out of time.

Although I liked The Night She Disappeared, I will admit that it didn't grab me quite like I hoped that it would and admittedly, the numerous points of view might've had something to do with it as well. It's a book that I'd encourage you to form your own opinions on and hopefully you'll enjoy it more than I did if you do choose to pick up a copy.


The Night She Disappeared by April Henry
Publisher: Henry Holt and Co. Books for Young Readers
Release Date: March 13, 2012
Edition: e-ARC
* Received for review via publisher and NetGalley.
Posted by Kristin @ Beneath Shining Stars at 2:36 AM