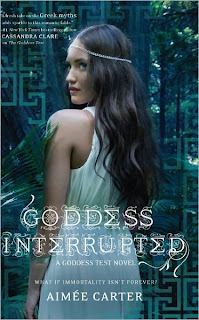 If you haven't read The Goddess Test yet and dislike spoilers, you're going to want to stop reading right about now.

In Goddess Interrupted, Kate's relationship with Henry is seriously tested. Did I mention that Calliope is still her psychotic self and hellbent on making Kate suffer? Because she definitely is. Then there's the fact that Cronus is breaking free of his prison and chances are, if he gets loose, there will be no survivors.

Goddess Interrupted begins with Kate's return to the Underworld and let's just say that she's a little insecure about how Henry feels about her--which is definitely understandable. Having said that, Goddess Interrupted is more focused on the conflict than the romance--or at least, that's how I saw it. This is definitely not a bad thing and ultimately things payoff in the long run for Kate. What do I mean? Well, I can't exactly give that away, now can I?

Persephone ends up playing a large role in Goddess Interrupted and in my opinion, she definitely redeems herself. Then there's Ingrid, one of the girls who Calliope killed, who really motivates Kate at various points in the book. I'm guessing that we're not done seeing her just yet either--or so I'm hoping. Really, I'd love to see more of Persephone and Ingrid in The Goddess Inheritance. But I'm forgetting to talk about Cronus, aren't I? If you're familiar with his role in Greek mythology, then you know why it's such a big deal that he's managing to get out of his prison. If you aren't familiar with his role, then you'll definitely see why he's so feared amongst the gods when you read Goddess Interrupted.

It can, admittedly, be frustrating to read bits of Goddess Interrupted. Why? Because Kate and Henry's relationship can be... crazy. In terms of personality, I think they're definitely opposites but it works--most of the time. And James? Well, I really can't say anything about him without giving you spoilers. Let's just say that he's definitely present in Goddess Interrupted, just maybe not in a way that you might be expecting.

Overall, I definitely enjoyed Goddess Interrupted and with the way that it ended, well, let's just say that I'd like to get my hands on the next book... immediately.