The Nightmare Garden by Caitlin Kittredge 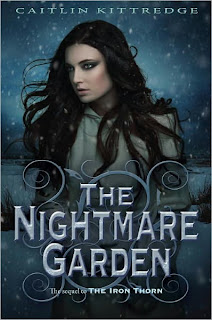 If you haven't read The Iron Thorn yet, you might want to stop reading now--if you don't want spoilers from The Iron Thorn (as it was the first book in the series).

The Nightmare Garden begins where The Iron Thorn leaves off, with Aoife Grayson being reunited with her brother, Conrad Grayson in the Mists, the world between the worlds Iron and Thorn. In The Nightmare Garden, Aoife will search for her mother, learn of the Brotherhood of Iron, visit the Erlkin city called Windhaven, and journey to the Arctic Circle as she searches for a way to make everything right. You'll meet the captain of a submersible named Rasputina Ivanova and even meet Queen Octavia of the Winter Court. Needless to say, there's a lot going on in The Nightmare Garden and it's definitely setting up the third book to be pretty interesting.

For the record, I have indeed read The Iron Thorn (although for some reason I've never gotten around to writing my review on it--which hopefully I'll have time to do at some point) and although it's always a bit rough coming back into a series after that year long wait that sits between books, I feel pretty easily back into Aoife's world. She's definitely not the girl that left Lovecraft several weeks before to hunt for her brother and to be honest, I'm not entirely sure that I like her as much as I initially did. Why? Because she seems a bit whiny at times and perhaps not as empathetic as she could be. When you meet Crow, I imagine that you'll know what I mean about Aoife's personality change and hopefully she'll continue to evolve as a character and move past it. (Actually, she starts to towards the end, but I'm hoping that the change is more evident in the next book... which I imagine it will be.)

Alright, there was something that I didn't see coming in The Nightmare Garden and as much as I'd like to tell you about it, there's no way that I can say it without spoiling it for you. Let's just say that hopefully it'll resolve itself in the next book. As for the plot itself, things definitely move along nicely and although I feel like I would've liked a steadier stream of action, I definitely can't complain. You'll see a lot more of the Iron world, a fair bit of the Mist realm, a glimpse of the Iron realm, and lastly a glimpse of a world that isn't exactly a part of any of the others (if that made any sense). Did I mention that you'll get to see the aftermath in Lovecraft? Because you will definitely catch a glimpse of that and Windhaven seems like an interesting city (its residents are also an interesting bunch). You'll run into Cal, Dean, and Bethina (of course) and along the way you'll also meet several new characters that I imagine we haven't seen the last of just yet.

In all, if you enjoy steampunk books with a healthy helping of fantasy, you might want to check out the Iron Codex trilogy if you haven't already. If you've enjoyed The Iron Thorn then I'd definitely suggest that you pick up The Nightmare Garden and if you're curious as to why it's called The Nightmare Garden, I'm assuming that it has to do with the nightmare clock (which you'll learn about in this book).


The Nightmare Garden by Caitlin Kittredge
Publisher: Delacorte Books for Young Readers, an imprint of Random House.
Release Date: February 14, 2012
Edition: e-ARC
* Received for review via publisher and NetGalley.
Posted by Kristin @ Beneath Shining Stars at 4:25 AM