In My Mailbox is a weekly meme hosted by Kristi (The Story Siren) and it allows book lovers to show what they've gotten over the week. It can be books bought, borrowed, received for review, etc.

Alas, no vlog this week; however, I did buy some books! (Also, I'll be knocking out comments on Sunday--I really need to get better about doing those!) 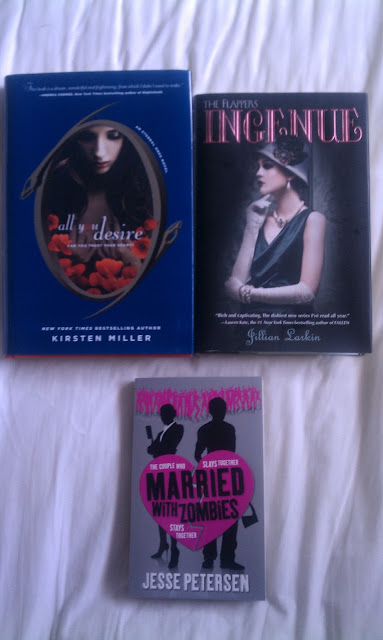 Bought:
All You Desire by Kirsten Miller
It's book two in Kirsten Miller's The Eternal Ones series and yes, I've already finished reading it. To sum up my thoughts? Adam, stop trying to make me think that you aren't the bad guy! You're making me waffle over here!

Ingenue by Jillian Larkin
Second book in the Flappers series and we're now up to four different points of view. Usually, this would annoy the silly out of me, but it actually works rather well in Ingenue--at least, I think so.

Married with Zombies by Jesse Petersen
Yes, I had to get this book so that I could read the other two--which I had received for review from Simon & Schuster UK. Honestly? The second and third books in this series were much better than the first one in my opinion.
Posted by Kristin @ Beneath Shining Stars at 3:25 PM