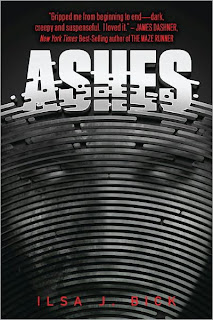 If I'm being completely honest, I have no idea how to sum up my thoughts on this book. I mean, don't get me wrong, I loved it, but the ending is a complete cliffhanger. As in "ran over the cliff and am now falling because I didn't see it coming." A part of me wants to demand the second book immediately so that I can know what happened and the other half is just so royally peeved that I fell off the cliff. Okay, okay, I should probably explain what I mean by "fell off the cliff." I mean to say that it's the sort of book that has an abrupt ending--as in, you keep looking for the next page only to find that it's not there. But enough about that, when you get there, you'll see what I mean.

If you like frightening zombies, then I'd recommend Ashes to you--although I'm warning you now that things can be graphic in the gore department. But yes, there's a girl and a boy and another boy and a little girl. Alex is an eighteen year old girl with a brain tumor and our main character. She's currently on a trip to finally spread the ashes of her parents over Lake Superior; however, fate has other plans for Alex as an enormous electromagnetic pulse wipes out all electronics and causes everyone to drop to the ground in excruciating pain. And if the loss of electronics wasn't bad enough, Alex has (somehow) regained her sense of smell (it's actually heightened) and some people are acting... oddly--if that's what you'd like to call eating an elderly woman. The pulse has also left an eight year old girl named Ellie in Alex's care and to put it simply, I did not like her. I really hope I like her more in the next book. I mean, yes, she did start to mature as the book went on... but I mean, "I hate you" seemed to be her favorite phase and she didn't like Mina (her father's old partner--a dog that sniffs bombs) who is pretty much the last memento she has from her father. And next up is Tom, a twenty year old ordnance disposal specialist in the Army who was in the same area as Alex when the pulse went off. Needless to say, he pairs up with Alex and Ellie and together, they do their best to survive.

But Ashes doesn't end there, not with them surviving in the woods because as winter approaches, they leave and a lot happens from that point on. Like Alex meeting Chris in the town of Rule and living with a crazy cult-like group. So technically, you could say that Ashes has a love triangle--although quite frankly I have no idea who I'm rooting for and this means that I'm waiting for the next book to make up my mind. I should probably mention the dogs though, right? After all, without them most of the people who survived the pulse wouldn't be able to tell who was going to change--and by change I mean turn into a flesh eating zombie.

Honestly, I could keep rambling on about Ashes, but I think you get the point. It's a book that I really enjoyed and although maybe it's not for everyone, if you like adventure and action with a smidge of romance, definitely check it out.