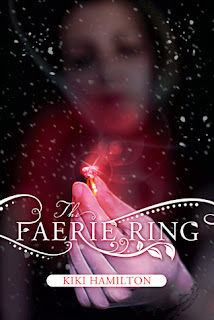 The Faerie Ring by Kiki Hamilton

Debut novelist Kiki Hamilton takes readers from the gritty slums and glittering ballrooms of Victorian London to the beguiling but menacing Otherworld of the Fey in this spellbinding tale of romance, suspense, and danger.
The year is 1871, and Tiki has been making a home for herself and her family of orphans in a deserted hideaway adjoining Charing Cross Station in central London. Their only means of survival is by picking pockets. One December night, Tiki steals a ring, and sets off a chain of events that could lead to all-out war with the Fey. For the ring belongs to Queen Victoria, and it binds the rulers of England and the realm of Faerie to peace. With the ring missing, a rebel group of faeries hopes to break the treaty with dark magic and blood—Tiki’s blood.
Unbeknownst to Tiki, she is being watched—and protected—by Rieker, a fellow thief who suspects she is involved in the disappearance of the ring. Rieker has secrets of his own, and Tiki is not all that she appears to be. Her very existence haunts Prince Leopold, the Queen’s son, who is driven to know more about the mysterious mark that encircles her wrist.
Prince, pauper, and thief—all must work together to secure the treaty.


-----
Why am I looking forward to The Faerie Ring? You do mean asides from the fact that I'm always game for  a good novel involving the Fae, right? Well, there's the fact that it's set in 1871--since I adore historical fiction, particularly from the 1800's. And then there's the fact that there's a romantic element to the story as well--I'm hoping that it's not going to overpower the storyline though. In short, it seems like my sort of book to read--and the cover is certainly both pretty and appropriate.

The Faerie Ring by Kiki Hamilton is published by Tor Teen (a part of Macmillan) and its expected publication date is September 27, 2011.

So, what are you waiting on this week? :D
Posted by Kristin @ Beneath Shining Stars at 10:42 PM