Die for Me by Amy Plum

Die for Me
Author: Amy Plum
Publisher: HarperTeen (an imprint of HarperCollins)
Release Date: May 10, 2011
Edition: Hardcover
* Purchased on my own. 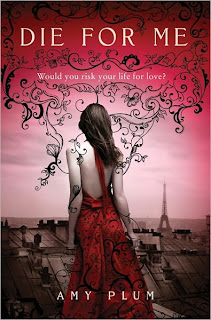 My life had always been blissfully, wonderfully normal. But it only took one moment to change everything.
Suddenly, my sister, Georgia, and I were orphans. We put our lives into storage and moved to Paris to live with my grandparents. And I knew my shattered heart, my shattered life, would never feel normal again. Then I met Vincent.
Mysterious, sexy, and unnervingly charming, Vincent Delacroix appeared out of nowhere and swept me off my feet. Just like that, I was in danger of losing my heart all over again. But I was ready to let it happen.
Of course, nothing is ever that easy. Because Vincent is no normal human. He has a terrifying destiny, one that puts his life at risk every day. He also has enemies . . . immortal, murderous enemies who are determined to destroy him and all of his kind.
While I'm fighting to piece together the remnants of my life, can I risk putting my heart—as well as my life and my family's—in jeopardy for a chance at love?

After losing her parents and moving to Paris, Kate Mercier is pretty much a ghost of who she once was. But when she starts frequenting a cafe and sees Vincent, everything changes. Being with him makes her happy; although when she discovers his secret, it threatens to tear them apart. You see, Vincent isn't human and his enemies would prefer to see him dead. With the loss of her parents still fresh in her mind, will Kate be able to deal with the possibility of Vincent's death and more importantly, what he is?

Die for Me was everything I thought that it'd be and more. But to be fair, I wasn't sure what to expect when I first began reading it. Sure, there had been glowing reviews, but would I love it too? The answer to that question was a resounding yes!

To be honest, I'm not really getting the Twilight references that everyone else seems to be apply to Die for Me. Vincent isn't running away from Kate, she's an old soul, she actually beats herself up about falling for him so easily (at times), and she's got enough common sense not to go jumping off of a cliff into the ocean just so that she can "see" her boyfriend. Also, Vincent doesn't exactly sparkle--unless you're talking about his personality. There is such a thing as love at first sight--rare as it is--and Kate and Vincent sure have it. But enough about that, let me talk about Vincent for a bit now--because yes, he was amazingly romantic and cute (albeit tortured at times). He hasn't been interested in girls ever since he was, well, alive--although Kate has technically brought him back to life (emotionally). So his fellow housemates (who have the same "condition" that he does) also take notice of Kate and that brings us around to my second favorite character, Jules!

If I can't have a Vincent in my life, I think I'd settle for a Jules. He might not be quite as romantic as Vincent, but he's good at bantering--which I've always found to be an endearing trait. Also, he likes to flirt with Kate--although I think more or less this is to bother Vincent. My feelings about Georgia--Kate's sister--proved to be correct, that much is for sure. Not that it's a bad thing, but with her lack of a danger detecting gene, well, it was bound to happen. I shall say no more than that though as I'd really prefer that you pick up a copy yourself and tear into it!

Oh, well, at page 180 I teared up a little--not "tears rolling down my cheeks" sad, but "how heartbreaking for her!" sad. I don't suggest skipping to the page to find out what I mean, but when you get there, well, you'll see what I mean. Personally, I found Amy Plum's writing style to be easy to read and a few times I caught myself laughing--which is why I try not to read in public spaces where people might stare at me while I read (and laugh/cry). Don't get me wrong, I'm not usually an emotional reader, but I enjoy it when I get so attached to the characters that I catch myself smiling, crying, or laughing. The plot moves along nicely and definitely sets things up nicely for the series while maintaining its own plot. Wait, that was a bit of a confusing sentence. I mean to say that it definitely has its own storyline (an event which will happen and move the story along because of it) but it also introduces the cast of characters wonderfully as well as what they are--again, things I won't mention in this review because I feel that it's somewhat of a spoiler.

With that, I'll tell you that I'd recommend this book to you if you like romances that are paranormal in nature--so to speak--and involve romantics--who may, on occasion, wield swords, open doors for you, disappear three days a month, and have enemies that want them dead. But seriously, if you couldn't tell by now, I really did enjoy reading Die for Me and I can't wait to see what's next in the series! Also, the original cover makes a lot more sense now--you'll see what I mean.

"Okay, I feel a bit silly talking to you like this," I said to the empty room. "Like in a minute, you're going to jump out of the closet and laugh your head off."
-pg. 273 of Die for Me
Overall Rating: ★★★★ and a half.
Posted by Kristin @ Beneath Shining Stars at 5:40 PM