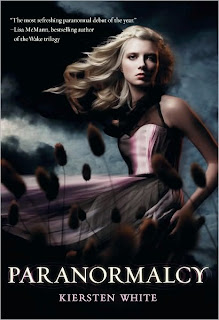 Evie’s always thought of herself as a normal teenager, even though she works for the International Paranormal Containment Agency, her ex-boyfriend is a faerie, she’s falling for a shape-shifter, and she’s the only person who can see through paranormals’ glamours.
But Evie’s about to realize that she may very well be at the center of a dark faerie prophecy promising destruction to all paranormal creatures.
So much for normal.

Evie isn't your typical teenager, as much as she'd love to be. She can see through paranormal glamour and is the reason why the IPCA was finally formed. Her ability makes her unique and her uniqueness means that she rarely leaves the Center. When someone begins killing off paranormals, Evie is the only one who can see the strange gold glow left on them and more importantly, there's an odd faerie prophecy about her that a strange boy named Lend seems to know about.

Paranormalcy is one of those books that is difficult to summarize without giving anything away and when it comes to unique paranormal stories, Paranormalcy is pretty high on the list. Kiersten White captures Evie's voice perfectly and it's evident on every page. Evie herself is an interesting character, having been raised at the Center ever since she was a kid. She's named her pink taser, has a unique fashion sense, is tutored, and have I mentioned that she can see through glamours? Seriously though, she really loves pink--although perhaps not as much as Easton Heights.

Then there's Lend, the strange boy who can change who he looks like, that breaks into the Center to look for something, only to be caught by Evie. Just call him the ultimate water boy. He's close to Evie's age and well, she ends up spending a lot of time with him. There's also Reth, a faerie who Evie used to "date." He's oddly obsessed about Evie and he plays an important role in Paranormalcy. More importantly, I'm oddly taken with him. Not in a "I'm in love with him!" sort of way, but I'm looking forward to seeing what sort of a role he'll play in Supernaturally.

This was actually my second time reading through Paranormalcy, but I still loved it just as much as I did the first time. Lish was still one of my favorite characters--whose computerized voice refused to let her curse--with Arianna being a close second (she was studying fashion design before she became a vampire). I'm really looking forward to Supernaturally which is due out on July 26th this year and if you haven't read Paranormlacy yet, I'd suggest giving it a go--although to be fair, Evie calling her taser Tasey did annoy me for a bit.

"It ranks right up there with lockers. In fact, sometimes I put my license inside my locker, and it's so cool I worry that the whole thing might explode with the sheer coolness of it all."
- pg. 152
Overall Rating: ★★★★ and a half.
Posted by Kristin @ Beneath Shining Stars at 4:28 AM