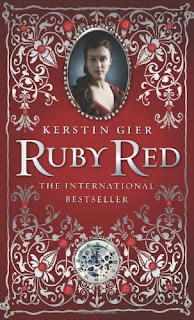 Summary from GoodReads:
Gwyneth Shepherd's sophisticated, beautiful cousin Charlotte has been prepared her entire life for traveling through time. But unexpectedly, it is Gwyneth, who in the middle of class takes a sudden spin to a different era! Gwyneth must now unearth the mystery of why her mother would lie about her birth date to ward off suspicion about her ability, brush up on her history, and work with Gideon, the time traveler from a similarly gifted family that passes the gene through its male line, and whose presence becomes, in time, less insufferable and more essential. Together, Gwyneth and Gideon journey through time to discover who, in the 18th century and in contemporary London, they can trust.

Gwyneth Shepherd has always believed that it would be her cousin, Charlotte, who would possess the time traveling gene that runs in their family. You can only imagine her surprise when it is she that ends up traveling back in time. The Guardians protect the time travelers and supposedly, their motives are pure; however, Gwyneth's mother doesn't believe this is the case, nor do two other time travelers who attempt to thwart the Guardians by stealing one of only two chronographs in existence. So, just who can Gwyneth trust? The Guardians? Her best friend, Lesley? Gideon, the male time traveler? Or perhaps she can't trust anyone at all.


I didn't expect to like Ruby Red as much as I did, to be honest. My biggest worry? The translation. Yes, Ruby Red was first written in German and sometimes things don't come across in the same way that they would in their original language. I have to say, the translation wasn't a problem at all and I found that I read the book from cover to cover in one sitting.


The prologue comes across as a bit confusing though (at least to me), as it starts in without giving the names of the people in the prologue nor really explaining what the chronograph is. I can, however, promise you that it will all make sense as you read further into Ruby Red. Even the title is explained--although I'd feel as if I'm giving a bit away if I fill you in on it now.


There were times that I found Gwyneth to be a bit annoying in the beginning--although she did grow on me as the story progressed. Lesley, her best friend, was a bit of a character too--always relating things to movies and looking up information for Gwyneth online. Charlotte's role was rather small in Ruby Red, and although I couldn't help but feel a little bad for her, I wish that she'd been more supportive of Gwyneth, though again, I can understand why she'd be so angry. Next there's Gideon, who started off a bit snooty and well, seemed to ignore Gwyneth at first. Happily, they grew on one another. Finally, the only other character that I'll mention in this post is Count Saint-Germain, who I know we'll be seeing more of. He's intimidating and has a knack for getting others to do as he pleases; because of this, Gwyneth is a bit wary of him (though Gideon doesn't see the Count as such).


My favorite part about Ruby Red? Our time travelers have a wardrobe mistress! A woman who makes all their clothes and is big on authenticity--although no whales were harmed in the making of Gwyneth's corset. How cool is that!? Better yet, it's not just the 1800's that they travel to and let's just say that the ability to speak several languages fluently comes in handy--as does the ability to fence. A majority of Ruby Red takes place in the present--though that isn't to say that the trips back to the past aren't important, because they're really important. Then there's the plot, which moved along at a steady pace and has really left me looking forward to Sapphire Blue which is due out in spring of 2012. It continues along, gaining speed, and eventually leaving off with the ending--and a tidbit from Sapphire Blue.


If you're intrigued by the plot, enjoy time travel, or if you're looking for something different to read, I'd recommend Ruby Red to you. Also, yes, there is a bit of romance in Ruby Red. It's certainly not the focus of this particular book, but it's definitely there.