Yup, it's that time of the week again! :D For those of you who don't know, In My Mailbox is a weekly meme hosted by Kristi at The Story Siren and it allows bloggers to show what they've gotten in their mailboxes during the week. It can be books bought, borrowed, received for review, and so forth. 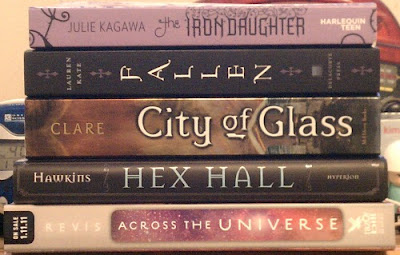 Bought:
The Iron Daughter by Julie Kagawa (My review here.)
After I finished reading The Iron King, I ran off and ordered The Iron Daughter online. Needless to say, I read it quickly and I've actually finished reading The Iron Queen recently too--although that review will probably go up sometime later in the week.
Fallen by Lauren Kate
I know, I know. You're probably wondering why I had the second book and not the first. Long story short? I borrowed a copy of both books to read from a friend and after the book signing I felt the need to get Fallen to keep Torment company.
City of Glass by Cassandra Clare
I'm actually terrified to read this. Why? Because I'll probably end up reading the excerpt from City of Fallen Angels and that'll lead to me hopping around, wondering what's going to happen next. Very tempted to wait a while to read it, but will probably be unable to resist--and thus will probably read it over the Thanksgiving weekend.
Hex Hall by Rachel Hawkins
I've heard a lot of good things about Hex Hall and I'm excited to give it a try! The plot sounds promising and I'm loving the cover!
Won:
Across the Universe by Beth Revis
A big thank you to Penguin Teen! Wondering how this happened? So am I. Well, okay, actually it was their Across the Universe Facebook page contest. They have it once a week and they give away a signed ARC of Across the Universe. I'm pretty sure I've used up my luck allotment now. Actually, here's the crazy part: I was sent two copies (both are signed). Part of me thinks this was just a mistake and the other part says that maybe this was due to putting in a request a little while before actually doing the contest entry stuff (although I'm leaning more towards lucky mistake).
Thus, I'm probably going to have a contest for it coming up too--although it'll probably happen in early December. Admittedly, this will be for followers only. Why? Because you guys are amazing and I did not expect to hit 100 followers this early.
Also, although extremely random, I've just noticed that my IMM stack has a color theme going for it and if I took out City of Glass, it'd pretty much go together. Apparently the colors of the week are black and purple. Anyways, it's back to reading for me! So, what's in your mailbox?
Posted by Kristin @ Beneath Shining Stars at 4:52 PM