Dead of Night by Lynn Viehl 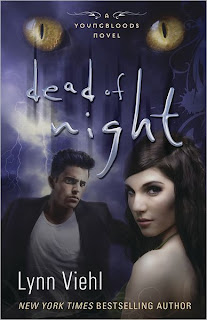 I've got a confession to make, I haven't read the first book yet. Having said that, I can't really give my opinion on Jesse and Cat's relationship because by the time Dead of Night begins, it's an established relationship and at that, they don't exactly get a ton of alone time. Cat is mainly busy helping her brothers out with the horses and working part-time at the bookstore in town--although they do manage to steal a little time away for themselves.
In Dead of Night, Cat will balance chores at home, a part-time job, and finding the girls that have been going missing. Oh, and the girls? They all bear some resemblance to Cat. Meanwhile she's also trying to convince her brothers (Gray and Trick) that she's just a 'normal' girl--despite the fact that she often takes off at night to spend time with Jesse. Did I mention that she's a Van Helsing? Yes, Cat's from a family of vampire hunters and Jesse happens to be from a family of vampires.

I didn't expect to like Dead of Night quite as much as I did and although there really wasn't much romance in Dead of Night, it still kept my interest. However, I wish that vampires had had more of a presence in Dead of Night. Would I recommend it to you? I think it depends on what you enjoy and if you decide to read Dead of Night, don't forget to read After Midnight first!