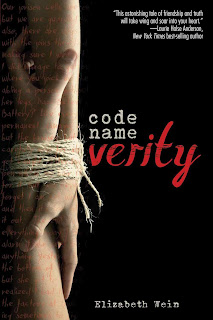 Without going into too much depth, I'll tell you that Code Name Verity is about two girls brought together by a war and tossed into a Nazi controlled France. The Gestapo have Verity, also known as Queenie or Julie, and she knows that she's not making it out of her situation. On the other hand, there's Maddie--who Queenie believes was killed bringing her into France--who--without a plane--is stuck in the same country as Queenie and more than anything, she wants to help her friend.

Code Name Verity is a book told in two parts; initially you meet Verity, who is being held by the Gestapo and she's being forced to reveal everything. But when you reach the second half, you'll see things from Maddie's point of view--the pilot who brought Verity to her assignment. For the record, they're both good friends and that definitely went a long way towards making Code Name Verity fun to read. Having said that, I will admit that the level of detail and back story in Code Name Verity was difficult for me to deal with--although I understand why it was done. It really made the book feel like it was longer than it actually was and at times, that meant that I had to set it down and come back to it--for the sake of being able to read all of it.

However, if you can get past that, the writing style is definitely fun to read and it's what kept me interested in Code Name Verity. Well, that and the fact that I really loved Verity as a character--I wish I could tell you why that was, but telling you would mean some serious spoilers! Maddie on the other hand, I didn't love at first; she seemed to spend a lot of time crying although, asides from that, she definitely wasn't a weak character--just one that didn't care to be shot at or have to do any shooting. To be fair to her, she was a civilian and I don't think being tossed into that sort of situation would be easy on anyone. Maddie does definitely come into her own and again, I can't say anymore than that because of spoilers! There are other characters present and you'll definitely see a great deal of them in Code Name Verity, but I honestly can't say that I took an interest in any of them in particular and as such, feel that it'd be best if you read about them on your own.

As for the plot itself, I definitely didn't expect some of it! I loved how inventive Verity was and how she could completely embody a role when she was given one. So if you like girl spies and pilots as well as World War II, then I'd recommend that you look into picking up a copy of Code Name Verity! I honestly enjoyed it more than I thought that I would and in all, it was definitely an interesting read.