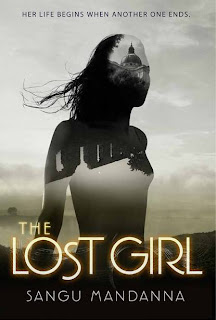 The Lost Girl by Sangu Mandanna

Summary via Goodreads:
Eva's life is not her own. She is a creation, an abomination - an echo. Made by the Weavers as a copy of someone else, she is expected to replace a girl named Amarra, her 'other', if she ever died. Eva studies what Amarra does, what she eats, what it's like to kiss her boyfriend, Ray. So when Amarra is killed in a car crash, Eva should be ready.

But fifteen years of studying never prepared her for this.

Now she must abandon everything she's ever known - the guardians who raised her, the boy she's forbidden to love - to move to India and convince the world that Amarra is still alive.

-----
I'm in love with the plot! Or rather, I'm absolutely fascinated by the idea of Eva being a duplicate and having to leave her life behind when Amarra dies. I mean, how would one deal with that!?

The Lost Girl by Sangu Mandanna is published by Balzer and Bray, an imprint of HarperCollins, and its expected publication date is August 28, 2012.

Posted by Kristin @ Beneath Shining Stars at 9:59 PM