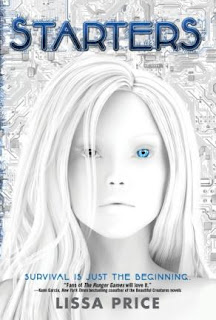 As an unclaimed minor with a younger brother, Callie knows that she has to keep them out of the institutions--which are pretty much prisons for minors until they come of age. This is how sixteen year old Callie decides to go to Prime Destinations, where Starters can make a very tidy sum if they're willing to rent their bodies to Enders who want to experience youth again. It's all very simple, as a Starter you simply fall asleep and when you wake up, you'll be back in your own body and your renter in theirs. At least, that's how it should be. But when Callie wakes up, she finds herself living her renter's life and what she'll discover during her time in her renter's life will put Prime Destinations in a whole new light.

If I'm thinking along the right lines, Starters are pretty much minors that are just starting off life while Enders are obviously getting close to the end of their lives. Everyone between the age of twenty and sixty? Dead. They didn't get inoculated during the Spore Wars and as a result, they didn't survive. Callie has been left to take care of her younger brother, Tyler, who happens to have a rare lung disease and as such, requires a fair bit of care. They also live with Michael, who they've known for quite some time. It'll be interesting to see where his relationship with Callie goes. On the other hand, there's Blake, the grandson of Senator Harrison, who Callie finds herself spending a lot of time with when she wakes up in her renter's life. Let's just call their relationship complicated, shall we? I promise you it'll make sense if you read Starters, but other than that my lips are zipped.

But I can't not mention the Old Man--who runs Prime Destinations--because let's face it, he's a major player in all of this. He's a recluse and is always wearing a mask; in short, no one knows who he is and he's not someone that you cross. (There's a lot more that I could say about him, but trust me, you'll want to learn about him on your own.) The Enders aren't all bad people though--although let's face it, renting young bodies is pretty darn creepy--and they'll prove it, if you give them a chance.

Lissa Price's writing style is absolutely lovely; it's fluid and before you know it, you'll have come to the end of Starters. That is to say, I read it much faster than expected and I certainly loved all of it; can I have the second book now? It definitely lived up to my expectations and I really hope that you'll enjoy it too.