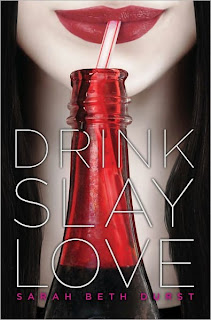 Getting staked by a unicorn was not in Pearl's plans. All she wanted was a predawn snack and instead, she got a unicorn horn through her chest. But that's not the end for Pearl; if anything, it's the beginning. As a result, Pearl can walk about during the day and just in time for the King of New England's Fealty Ceremony which means that she's tasked with selecting the food for the feast. But the real kicker? She's developed a conscience and vampires do not care about their food's feelings... although Pearl has made friends with a human (Bethany) and is--in her own way--crushing on Evan who is definitely not Jadrien, the vampire that up until recently has been the love of her life. She'll have to tread carefully and hopefully find a comfortable balance between Family and friends.


If you thought that the unicorn staking Pearl was the strangest part of Drink, Slay, Love you should probably wait until the last fourth of the book. Well, roughly the last fourth. Seriously, you'll see what I mean. But for now, let me briefly talk about the vampires in Drink, Slay, Love. They're an interesting bunch and a few are certainly certifiably crazy, but for the most part, they keep to themselves; perhaps more importantly, if you're weak, you won't last long. On top of all that? You have to be exceedingly careful as a vampire, seeing as how there are indeed vampire hunters out there.

Pearl was born a vampire, is the youngest member of her Family, and up until recently believed that unicorns were merely myths... until a very real horn ended up protruding from her chest. Now she's a daywalker, mingling with humans, developing a conscience, and hunting said unicorn. Then there's Jadrien, her (vampire) boyfriend for lack of a better word. He's nice to look at, a bit of an ass/bad boy, and he's definitely got a thing for Pearl--or at least, who Pearl used to be before the incident. But he's let her little secret slip and seems to see her human friends as convenient snacks which only serves to irk Pearl. And last, but certainly not least, there's Evan, who seems to be out to save Pearl, her own veritable knight in shining armor. Needless to say, I like Evan better, seeing as how I don't like guys who use girls to make other girls jealous and Jadrien does just that. I mean, both guys sound hot, but for once I'm not jumping on the bad boy train.

And now I'm honestly blanking on what else to tell you about Drink, Slay, Love. I really enjoyed it more than I thought that I was going to and just know going into it that it is humorous at times. Their prom theme for example, amused me greatly--as did the occasional reference to vampires and the lack of sparkling. With the way that Drink, Slay, Love ended, I'm guessing that there could very well be another book and well, I'm certainly hoping that there will be!

In short? If you've been thinking about reading Drink, Slay, Love then I'd definitely suggest giving it a go.