When We Wake by Karen Healey 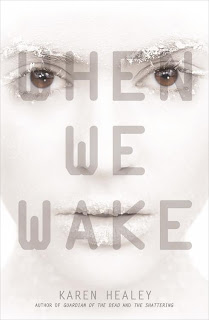 When Tegan wakes up, she has no idea where she is or how she's gotten there. But she's been informed--by a doctor--that over a century has passed and that she's been brought back to life after being cryogenically frozen. But the future isn't all it's cracked up to be and more importantly, the military is hiding something big. How big? Massive.

It's awkward being the girl from the past. Just ask Tegan. Most everyone is on a vegetarian diet, computers are flexible and flat, EarRings work as phones, and oh, there's a boy in her class who happens to bear a strong resemblance to her boyfriend (from before her freeze), Dalmar. Granted, of course, the boy--Abdi--is definitely not Dalmar; nor is he very happy about Tegan calling him Dalmar. There's also a religious group that thinks Tegan should kill herself because her being brought back to life couldn't possibly be a part of God's will. Oh, and another group who thinks that she should be deported because she couldn't possibly still be considered to be an Australian citizen. You know, having been dead.

There's also Bethani, the first friend that Tegan makes in the future, who is an aspiring journalist. And my personal favorite secondary character, Joph, who has a bright future as a chemist and although she takes naps during class, actually has a lot going on. There's more to Joph than that, but I'll leave that for you to learn about when you read When We Wake. But trust me, there are many reasons to like Joph. I mean, honestly, I just really liked the entire cast of characters.

But at the same time, I feel like When We Wake is one of those books that I want to gently shake in the hopes that more pages will magically appear. I have no idea if there's going to be a second book; but with an ending like that, I really hope that there will be one. It just feels like there's more left to tell and I really hope that there is--mostly because I really want to spend more time with When We Wake's cast of characters.

Would I recommend When We Wake to you? If the idea of a cyrogenically frozen girl waking up in the future--in Australia--sounds appealing to you, definitely! When We Wake was a fun read featuring a unique future that I can see other readers enjoying.


When We Wake by Karen Healey
Publisher: Little, Brown Books for Young Readers
Release Date: March 5, 2013
Edition: e-copy
* Received for review via publisher and NetGalley.
Posted by Kristin @ Beneath Shining Stars at 9:30 AM