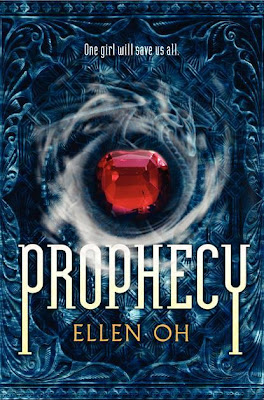 Summary via Goodreads:
The greatest warrior in all of the Seven Kingdoms... is a girl with yellow eyes.

Kira’s the only female in the king’s army, and the prince’s bodyguard. She’s a demon slayer and an outcast, hated by nearly everyone in her home city of Hansong. And, she’s their only hope...

Murdered kings and discovered traitors point to a demon invasion, sending Kira on the run with the young prince. He may be the savior predicted in the Dragon King Prophecy, but the missing treasure of myth may be the true key. With only the guidance of the cryptic prophecy, Kira must battle demon soldiers, evil shaman, and the Demon Lord himself to find what was once lost and raise a prince into a king.

Intrigue and mystery, ancient lore and action-packed fantasy come together in this heart-stopping first book in a trilogy.

Why am I waiting on Prophecy by Ellen Oh? That plot! That cover! Okay, and the fact that I hear that it's Asian influenced. (Specifically Korean, if I'm remembering correctly.) Point and case, it sounds like it'll be a breath of fresh air.

Prophecy by Ellen Oh is published by HarperTeen, an imprint of HarperCollins, and its expected publication date is January 2, 2013.

What are you waiting on this week?
.
Posted by Kristin @ Beneath Shining Stars at 10:07 PM