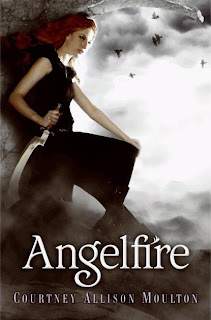 Alright, there's no way that I'm going to be able to accurately summarize Angelfire for you. Yes, there is angel mythology involved, fights (against the demonic reapers), and a healthy helping of adventure. But I think the biggest selling point for Angelfire is this: Ellie, the main character, is definitely not a weak female lead.

The mythology for Angelfire is definitely well thought out and although--for the most part--it's nothing brand new in terms of angel mythology, I love the idea of angelic and demonic reapers, the different types of reapers (lupine, vir, etc.), and the Enshi definitely sounds like it's going to play an interesting role in the rest of the trilogy.

Angelfire does an excellent job of balancing out high school drama (and life) with action that doesn't necessarily take place at school and have I mentioned the boys? No? Well, let me remedy that. For the most part, the focus is on Will, Ellie's Guardian, and his relationship with her--and I know that sounds like it's immediately lovey dovey, but it's not. And their bond? It's not exactly something new. In fact, it's actually quite old. While I really do like Will, I must admit that Cadan has piqued my interest the most. However, you don't get to see a ton of him in Angelfire--I hear there's more of him in Wings of the Wicked though, and that definitely makes me excited to dive into the second book.

I know I haven't said much about Ellie, but as Angelfire is written in first person, well, believe me when I say that you'll learn more about her character by reading Angelfire than by having me try to explain her to you. That, and I'm trying not to give anything major away. Although I will say this: her dad is a complete butt. As for Ellie's enemy? It's a guy--well, I say guy when I mean 'not human'--named Bastian who is searching for the Enshi in order to end Ellie... entirely.

Would I recommend Angelfire to you? Yes, if you're looking for a book involving cute boys, angel mythology, and a female main character who can more than hold her own. Sure, Will might be her guardian, but that doesn't mean that she needs him to save her every time.