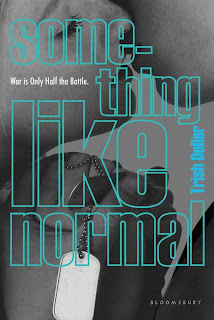 Back home on leave after a deployment in Afghanistan, nineteen year old Travis is just not fitting in. Home no longer feels like home and the fact that his ex-girlfriend left him mid-deployment for his brother, Ryan, doesn't help matters either--nor does the fact that he witnessed his best friend's death in Afghanistan. Slowly but surely he'll get better though, with a little help from Harper Gray.

If you've ever wondered what someone goes through after coming back from a deployment, read Something Like Normal. Why? Because Something Like Normal is spot on. The infantry has it tough to begin with and the whole cheating significant other due to distance thing? It happens more than it should. But I'm not going to get into all of that; let's just say that I feel like Something Like Normal hits on it perfectly--and that I have a friend who is Army infantry which is why I found myself nodding as I read. Travis, however, is a Marine and a fictional character, but one I feel that people can definitely relate to.

For the record, Travis, who is indeed the main character, is by no means perfect. He was--to put it simply--a bit of a douchebag when he was younger; however, he's definitely getting better and I'd like to think that Harper has something to do with it--that, and the fact that he doesn't really seem to roll with the same group of friends anymore. As for Harper, I really, really liked her. She's strong, understanding, and she just seems like a really wonderful girl--not to mention perfect for Travis. Seriously though, Harper and Travis together? Adorable. As for Ryan, he's Travis's younger brother, currently dating Paige (Travis's ex-girlfriend), and a complete butt. As Travis puts it: if he has it, Ryan wants it. And Paige? Don't get me started on how much I disliked her. But at the same time, that sort of thing definitely happens. Travis's mother also kicked butt--in particular in the case of Travis's father's cruddy attitude.

As for the plot, I definitely loved how it flowed and how much of it focused on post deployment stuff as compared to the romance--which was definitely there, but in a more subtle manner. So yes, I'd recommend Something Like Normal to you--but please do understand that there is definitely some cussing, mention of guy parts, and some drinking as well--none of which is particularly uncommon given what Travis does (job wise).


Something Like Normal by Trish Doller
Publisher: Bloomsbury USA Childrens
Release Date: June 19, 2012
Edition: e-ARC
* Received for review via publisher and NetGalley.
Posted by Kristin @ Beneath Shining Stars at 3:00 PM