My Life Next Door by Huntley Fitzpatrick 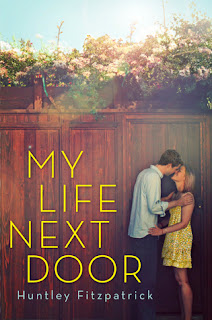 Samantha Reed, age seventeen, is the daughter of a state senator and you could definitely say that she follows the rules, at least until recently. The Garretts, their next door neighbors, have always been her mother's least favorite people and as such, off limits--although this was more of an unwritten rule. But Samantha has made a point of watching them and when Jase Garrett, the second oldest son of the Garrett household, makes a point of talking to her, well, she'll learn a lot about their house and how different it is from hers.

And the funny thing about the little summary I've just given you is this: that's not even the "big" thing that happens in My Life Next Door. What is it? Well, that I'm not telling you--because I think it's more fun to find out on your own. Let's just say that I didn't see it coming until it happened and that it changes things for both households.

So let's talk about Samantha Reed for a moment, yes? She's exactly the daughter that her mother expects her to be while her older sister, Tracy, is more rebellious. But don't worry, Samantha definitely comes into her own and in doing so, helps her mother come to her senses (in a sense). Then you've got Jase Garrett, who she gets very close with. He's such a sweetheart and I cannot imagine hating him at all. There were several occasions in which he made me smile and I hope that you'll love him as much as I did! While I could get into all of his siblings, I'll resist the urge and just tell you that his little brother, George, is adorable, full of facts, and cannot keep a secret--which, in this case, is simply endearing rather than a pain. There's a pretty awkward scene involving George, Samantha, and Jase--and believe me, you'll understand what I mean when you get there.

As for Samantha's family, her sister doesn't make much of an appearance and her mother is definitely there, but yes, they're a single parent household. As for her mother, well, I'd say that she doesn't exactly excel at being a mother; her campaign is really her focus and that much is evident throughout My Life Next Door. Not only that, but she's letting a man named Clay--who is very, very good at political campaigns--run her life (that's the easiest way to explain it). And Clay? Well, he doesn't seem too bad at first, but as things progress, you'll find out that he's scum and the reason behind why I've just said that will become all to evident.

Oh! But I can't not mention Tim! He started off as a complete jerk and for the longest time I thought that was all that he'd be during My Life Next Door; however, as it turned out, I was wrong! It does take him a while to turn around, but he definitely does! So if you're not thrilled with him at first, rest assured that he does change. As for Nan, well, I won't get into what I thought of her--but that'll make sense when you read My Life Next Door, I promise. In all, I really loved the Garretts and I loved how things played out. Also, I should probably warn you that there is some cursing in My Life Next Door--mainly from Tim--and that there is mention of sex as well (but it's not detailed nor distasteful).

Would I recommend My Life Next Door to you? Yes! This is definitely a contemporary to pick up if you're looking for an adorable romance that has a plot beyond just the romance.


My Life Next Door by Huntley Fitzpatrick
Publisher: Dial, an imprint of Penguin Group
Release Date: June 14, 2012
Edition: e-ARC
* Received for review via publisher and NetGalley.
Posted by Kristin @ Beneath Shining Stars at 7:24 PM