Shadow and Bone by Leigh Bardugo 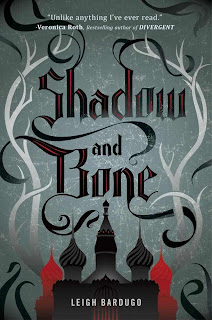 If you're thinking about reading Shadow and Bone and enjoy fantasy with a Russian flare, do yourself a favor and go pick up a copy. This is, in all actuality, high fantasy. It has Russian influences but it is not set in Russia--just thought I'd make that clear. Having said that, it's actually quite easy to follow and everything is explained in due time. As someone who often struggles with high fantasy due to overly complex worlds, this was perfectly balanced.

There are three countries (none of which get along) and two types of people in Shadow and Bone; you have the Grisha--people who practice the "Small Science"--and everyone else. The Small Science is pretty much magic--although you cannot conjure something out of nothing--and those that have the ability to use it are known as Grisha. The Grisha are treated extremely well and they want for nothing; they wear either crimson, purple, or dark blue depending upon what they can do and at that, the embroidery on their cuffs also marks what they do. So the main categories are Summoners (blue), Corporalki (red), and Fabrikators (purple). Even if this makes no sense to you now, I promise it will when you've read Shadow and Bone.

But let's talk about the characters, shall we? Our main character is Alina Starkov who was orphaned as a child alongside Mal and together they grew up in Duke Keramsov's home before joining the Second Army (together as well). She's actually had a crush on Mal for quite some time and when his life is threatened in the Fold, she does something that will change her life forever; after all, as it turns out, Alina is a Grisha. Don't fret though because it's not the last that you've seen of Mal and he reappears later on in the book.  However, it's at that point that you meet the Darkling; the only Grisha that is allowed to wear black and let me just tell you that I definitely liked his character. That is to say, I completely fell for his character and I can't tell you anything other than that but let's just say that although I still adore him... I can't say anymore than that.

The plot is definitely not overwhelmed by the romance and I really felt that they were intertwined nicely. Okay, okay, I might've squealed a couple of times due to the Darkling and a few times because of Mal too--to the point where I seriously contemplated how wise it was to read this book at night (because it's hard to freak out when everyone else is sleeping). I definitely also loved Genya who is a very unique Fabrikator known as the Tailor amongst the other Grisha. Her ability is amazing, I'd love to be her friend (this may have something to do with dark circles), and the fact that she's in love with a guy who can't peel himself away from weapons and whatnot? I feel terrible for her but at the same time, it's just too adorable!

Oh! And the library at the Little Palace? It sounds like the perfect place to curl up with a good book and wait until you read the description of the doors! Plus there's Botkin, the combat instructor for the Grisha who is hilarious and he really kicks Alina's butt into shape! On the other hand, you have Zoya who you'll meet early on and quite frankly, she's a bitch. She despises Alina and Alina is definitely not a fan of Zoya because Zoya? She's a snob.

So yes, this is me telling you that you should probably pick up a copy of Shadow and Bone by Leigh Bardugo because not only is the cover stunning, the book itself is amazing. This is definitely one of my favorite reads for 2012 and if you've been thinking about reading it, definitely do so!