Keep Holding On by Susane Colasanti 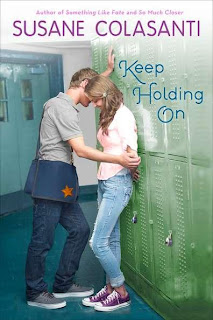 Noelle has been relentlessly bullied at school for years and life at home isn't any better. But she'd rather lie than admit just how bad things are; the way that Noelle sees it, she only has to survive until graduation and then everything will be better. But something huge happens during the school year and Noelle will finally take a stand because of it.

I'll be honest, Keep Holding On really made me appreciate the high school I attended--in which there were about two thousand students and to the best of my knowledge, very few cases of bullying during my time there. Granted, of course, that I had my little group and due to it, I was relatively protected. So for me, Keep Holding On was an eye opening book, one that I'd recommend to everyone--both the victims of bullying and those who have--perhaps--been able to remain blissfully ignorant of it. Keep Holding On is definitely a powerful read and I can't imagine not feeling bad for Noelle.

For the record, Noelle's life is anything but easy and her home life? It's horrid. Her mother is so focused on herself that she really doesn't notice--or care--about Noelle (in my opinion). There's rarely ever anything in the fridge, she takes Noelle's money, and she's volatile. On the other hand, Noelle is very defensive--with good reason--and it does take her a while to stand up for herself, but when she does? I couldn't help but cheer her on. And I couldn't not mention Julian--who is indeed Noelle's love interest in Keep Holding On. It does take a while for the romance to get going--and it's definitely not the focus, which is totally fine--but when it finally kicked up, I had to toss my hands in the air and shout, "Finally!"

Other characters that I really enjoyed include Simon--who runs the school's literary magazine and is pretty much Noelle's personal hero for being an individual--and Ms. Scofield--who is nerdy beyond all reason and the school's Physics teacher. The cast of characters is really great and admittedly, if I were to have one problem with Keep Holding On, it'd be a minor one. What am I talking about? Noelle's school really felt like an us versus them mentality--with a few neutral kids. It felt--to me--like almost her entire school bullied her or at least, did nothing about it. I'm completely aware that Keep Holding On doesn't cover all of the students at Noelle's school and well, that's just my opinion.

Overall, I'd definitely recommend Keep Holding On to you if you want to read a story that deals with bullying.


Keep Holding On by Susane Colasanti
Publisher: Viking Juvenile, an imprint of Penguin Group
Release Date: May 31, 2012
Edition: e-ARC
* Received for review via publisher and NetGalley.
Posted by Kristin @ Beneath Shining Stars at 12:30 PM