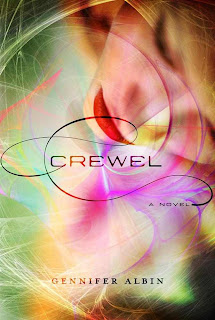 That’s what the other girls whisper behind her back. But sixteen year-old Adelice Lewys has a secret: she wants to fail.

Gifted with the ability to weave time with matter, she’s exactly what the Guild is looking for, and in the world of Arras, being chosen as a Spinster is everything a girl could want. It means privilege, eternal beauty, and being something other than a secretary. It also means the power to embroider the very fabric of life. But if controlling what people eat, where they live and how many children they have is the price of having it all, Adelice isn’t interested.

Not that her feelings matter, because she slipped and wove a moment at testing, and they’re coming for her—tonight.

Now she has one hour to eat her mom’s overcooked pot roast. One hour to listen to her sister’s academy gossip and laugh at her Dad’s stupid jokes. One hour to pretend everything’s okay. And one hour to escape.

Because once you become a Spinster, there’s no turning back.

Why am I looking forward to Crewel? Because I love how weaving has been worked into the storyline! But honestly, the plot sounds amazing.

Crewel by Gennifer Albin is published by Farrar, Straus, and Giroux BYR, a part of Macmillan, and its expected publication date is October 16, 2012--which happens to be my birthday (which means I know what I'm gifting myself).
.
Posted by Kristin @ Beneath Shining Stars at 12:46 AM