The Hunt by Andrew Fukuda 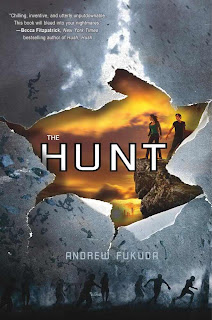 Gene has been surviving by pretending to be one of the vampires and in itself, that is no simple task; but when you add a heper hunt to the mix? It's disastrous. Suddenly it's his name that they're calling to participate and it should be a great honor... and it would be, if he were, in fact, a vampire. But instead it's a test to see how well he can hide amongst the wolves (so to speak) and then there's the matter of a girl--who he's developing feelings for, even though he knows that getting involved with her would be disastrous for him.

The Hunt is definitely a page turner and if you're looking vampires that pack a real bite, this is a book that you might want to consider picking up. On top of that, yes, it's a dystopian. How does that work? Well, vampires are the only ones left--with the exception of humans who have managed to hide what they are and the "hepers" that their leader keeps. And Gene? He's been managing pretty well--at least, until recently. Lately it seems like he's been slipping up pretty often and that's one pack of predators that you don't want to end up as a snack for!

I really enjoyed how complex the vampires were--although I will admit that the constant neck snapping, drooling, and so forth was a bit too much for me personally. Also, I was highly amused by the fact that, when they find something to be humorous, they scratch their wrists. But let me mention Ashley June quickly--a girl that Gene goes to school with. She didn't leave much of an impression on me at first, although as The Hunt went on, I did grow to like her--at least somewhat. There's also Sissy, who you'll get to know later on in the book and I think I liked her more than Ashley June, although at this point, I think I'm going to read the next book to really make up my mind. But yes, The Hunt is told from a male perspective. Having said that, I did not find it difficult to follow along with.

While The Hunt certainly kept me turning pages and was, overall, a read that kept me interested, I think I would've liked them to have gotten farther into the hunt than they did--although let's face it, I did enjoy the ending. Will I be checking out the next book? Most likely yes. The vampires in The Hunt are definitely darker than those that I've read about lately and as such, it was definitely a welcome change. Would I recommend The Hunt to you? If you're intrigued by the idea of a human trying to fit in amongst vampires and what happens when things become difficult, yes. However, if you don't like more savage vampires, then this is probably not for you.


The Hunt by Andrew Fukuda
Publisher: St. Martin's Griffin
Release Date: May 8, 2012
Edition: e-ARC
* Received for review via publisher and NetGalley.
Posted by Kristin @ Beneath Shining Stars at 9:52 AM