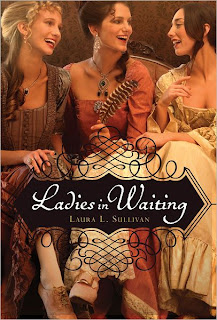 There are three different girls by the name of Elizabeth in Ladies in Waiting, all of which come from different backgrounds and yet, they share one thing in common: they're all ladies in waiting for the new queen, Queen Catherine. There's Eliza, who is quite wealthy and would much rather write plays than live a quiet, married life as well as Zabby, who grew up on a plantation and is more interested in scientific pursuits than other young ladies and lastly there's Beth, whose mother is dead set on keeping her completely chaste in the hopes of restoring their family's name.

I'm of two minds when it comes to Ladies in Waiting; on one hand, I did enjoy it and yet, at the same time, there were moments when I felt as if the plot slowed down and to be honest, there were a few times that I felt my interest waning because of it. If you like the time period in which it's set, then please do pick up a copy so that you can form your own opinions on it. Having said that, I definitely liked Eliza the best out of the three Elizabeths mainly because she knows what she wants to do and she knows exactly how she can accomplish it. Beth is definitely an innocent and at times, she was a bit creepy--in the manner in which she handled certain situations. But I think my real problem was with Zabby as she really seems torn for most of the book. There are essentially two things that she wants and yes, she can have both of them, but maybe not in the manner that she wants to have them--that'd make more sense if you've read the book, I promise.

I think I would've enjoyed it a bit more if there had been more intrigue or if Zabby had had less of an internal debate when it came to how she wanted to go about getting the King's attention. And yes, the King definitely plays a large role in Ladies in Waiting, even if he's not in every scene. Overall, I'd say that I enjoyed Ladies in Waiting and that I thought it ended perfectly considering the time period--although I do feel bad for Beth's mother.


Ladies in Waiting by Laura L. Sullivan
Publisher: Harcourt Children's Books, a part of Houghton Mifflin Harcourt
Release Date: May 8, 2012
Edition: e-ARC
* Received for review via publisher and NetGalley.
Posted by Kristin @ Beneath Shining Stars at 6:47 AM