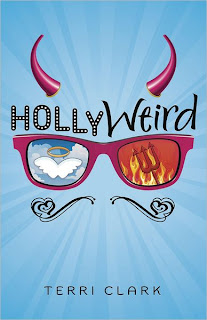 When Aly King wins a contest to fly out to Los Angeles (with her best friend, Des, and her older sister/chaperone Missy) to meet the Dakota Danvers, she gets much more than she bargained for. After all, Dakota is far from the perfect boy that Hollywood makes him out to be; if anything, he's downright evil--being one of Lucifer's sons and all that. More importantly, he's up to something and Aly and Des are about to wind up in the middle of it all; luckily, they'll have some help from Jameson (actually, he'll have help from them), a fallen angel working on redeeming himself for another shot at his wings. Will Aly fall victim to Dakota's devilish plot? Or will she--with a little heavenly help--foil it?

Hollyweird is a fun, lighthearted read--okay, it's mostly lighthearted. There are words that might not make any sense--thanks to Des and the slew of words that she often makes up--and a lot of brand names mentioned, but once you get past that, Hollyweird is an enjoyable read. It's told from Jameson and Aly's points of view (alternating) and I think that it definitely lends a lot of light onto the story. Also, I will admit that I really loved how the seven deadly sins were incorporated into Hollyweird! (I would've been done in by gluttony, that's for sure.)

And yes, if you're wondering, there are other preternaturals in Hollyweird. It's not all angels and demons, I promise--although they are the focus of Hollyweird. Des has always believed in that sort of thing and I'd say she handles things pretty well--asides from Dakota, but that's understandable. Aly, on the other hand, does not believe in the supernatural and she's the sort of girl who needs some proof if she's going to believe--her reaction is, in my opinion, quite believable. I'd say that, overall, the romance is sort of muted by everything else that's going on and in that sense, if you're looking for some serious romance, this is probably not where you're going to find it--which was fine with me.

Overall, Hollyweird was an enjoyable read although perhaps not as much of a page turner as I was hoping for. If you're looking for a lighter read, then you may want to consider picking up a copy of Hollyweird to read.


Hollyweird by Terri Clark
Publisher: Flux
Release Date: May 8, 2012
Edition: e-ARC
* Received for review via publisher and NetGalley.
Posted by Kristin @ Beneath Shining Stars at 3:05 PM