The Wicked and the Just by J. Anderson Coats 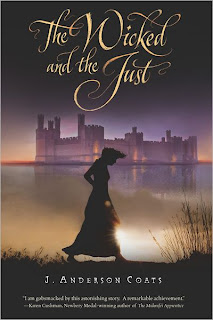 On one hand you have Cecily, an English girl who has recently moved to Caernarvon with her father--not that she wanted to. She's definitely a bit of a brat and Cecily is also not exactly fond of the Welsh (for a while, she's pretty sure that they'll murder her where she stands). To be fair, none of the Englishmen and women who live in Caernarvon get along with the Welsh terribly well. They tax them relentlessly and if the Welsh can't pay, they take what they feel is equal in value to the tax. And then you have Gwenhwyfar, a Welsh girl who has had everything taken from her (except for her mother and her younger brother). She works in Cecily's household and is none to pleased about it. Both of them are fiery in their own way and they're alike in many ways (while still being extremely different). As much as I'd love to tell you about the story itself, I really feel that this one is best experienced entirely on your own. Seriously, I don't want to ruin anything for you.

And if you couldn't tell from all of that, the story is really focused around English and Welsh relations. It's a read that's bloody (on occasion), exciting, and at times, the characters can be maddening, but it makes for a brilliant read. I'd recommend this to you if you're looking for something that is historical fiction and relevant to the issues during the time period.


The Wicked and the Just by J. Anderson Coats
Publisher: Houghton Mifflin Harcourt
Release Date: April 17, 2012
Edition: e-ARC
* Received for review via publisher and NetGalley.
Posted by Kristin @ Beneath Shining Stars at 1:31 PM