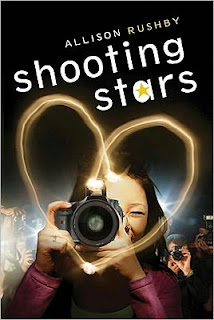 Meet Josephine Taylor--known as Jo to all and Zo Jo to the paparazzi crowd--who takes pictures that most of the other paparazzi can't due to her height and the fact that although she's sixteen, she can look as young as eleven. She's been snapping pictures of celebrities as a way to pay for photography classes that will take her out of the paparazzi scene and those classes are anything but cheap! When presented with the opportunity to make a sizable sum by photographing Ned Hartnett, she takes it and that is when the fun really begins. Why? Jo will have to go undercover at the retreat in Boston to take pictures of Ned and she just might lose her heart to him along the way.

It does take some time to really get into Shooting Stars but once Jo settles into the retreat, things really start to move. I really loved the fact that Jo is half Japanese and that although she's cunning when it comes to taking pictures, she's not completely ruthless. The paparazzi angle of Shooting Stars in general was really fun and it definitely played a part in Jo's growth--you'll see what I mean. And then there's Ned Hartnett who I have to mention because he plays such a huge role in Shooting Stars. If it wasn't for him, well, there's a lot of stuff that wouldn't have happened. Ah! I can't not mention Katrina though! She's Jo's roommate at the retreat and an ex-ballerina who is extremely tall when compared to Jo. I love the fact that she befriends Jo and that their friendship continued after the retreat as well.

Overall, I'd recommend Shooting Stars to you if you're looking for a light, fun read that ends in--what I consider to be--a surprising way. You might struggle to get into Shooting Stars at first, but once you get to the pool scene, things get interesting. And the ending? Adorable and absolutely perfect; I couldn't see the book ending any other way.