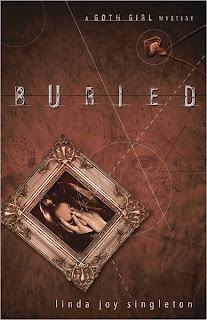 Thorn is a Finder which is pretty much what it sounds like... she finds things and on occasion, has visions related to the object(s) she touches. When she comes across a heart shaped locket on a shoestring, she gets the feeling that it'll lead her on a wild hunt as she attempts to reunite it with its owner and well, she's right. But if the locket wasn't creepy enough on its own, there's also the fact that it leads her to the grave of a child and all these things are definitely connected.

If I'm being completely honest, I didn't connect with Thorn for quite some time; this may have something to do with the fact that she dresses like a goth and doesn't use her real name--which is Beth Ann, if you were wondering. But then the Grin Reaper enters the picture and so does the singing competition that will make one of Thorn's secrets a little less secret. At that point, Thorn becomes a lot more interesting.

But Thorn's dad? Not quite sure how to describe him. Passive aggressive? I spent more than half the book wanting to shake some sense into him and I think the ultimate lesson to take away from Buried is this: appearances can be deceiving. Oh! I also absolutely loved Sabine--Thorn's friend from California who happens to be a psychic. Seriously, she has a spirit guide named Opal and even a state away she helps out Thorn. This may be due to the fact that Sabine is the main character from "The Seer" series that Linda Joy Singleton also writes--actually, I think it's on my bookshelf somewhere. In that sense, it takes place in the same world.

Ultimately, I feel like Buried started off slow and it didn't real grab me until it was halfway through. Although I didn't feel like it was particularly my cup of tea, I think that there are definitely readers who will love Buried. I mean, how often do you have a main character that's a goth!? Also, I love the idea of a secondhand store that doubles as a doughnut shop (The Hole Truth) and seriously, who wouldn't want a shop like that!? That will make a lot more sense if you read the book, that much I promise. Did I mention that Thorn is a terrible detective? Because I probably should say that. I don't mean it in a bad way, I only mean to say that she seems to jump to conclusions and to be honest, I found it to be a little bit humorous.

To summarize, Buried is a unique read. The main character is definitely different and things definitely pickup as the book progresses. It does appear to be the first book in a series (The Goth Girl Mysteries) and I'm definitely curious to see how things will progress for Thorn and company. Overall a good book and one that I'd definitely recommend you form your own opinions about.