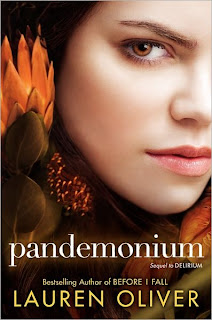 If you haven't read Delirium yet and do not wish to have spoilers, you'll want to stop reading now.

There's a very strong emphasis on change in Pandemonium. You have Lena rising like a phoenix from the ashes of her old life and then there's the resistance--its ranks have been growing lately. Taking place during "then" (during Lena's time in the Wilds after her escape) and the "now" (when Lena is working with the resistance), you'll meet a new cast of characters and definitely see Lena evolve into a stronger person.

For the sake of not giving you spoilers, I'm not giving you a summary. I'll tell you that there's definitely some action in Pandemonium and that there is indeed a new boy--who Lena does seem to be falling for. There's the DFA (Deliria-Free America) trying to convince everyone that being cured is the only way, the rebellion growing in numbers, a kidnapping, and an ending that will leave you dying for the next book.

If you've seen my review for Delirium, you'll know that I was a bit skeptical coming into Pandemonium and to be honest, I really feel that Pandemonium delivered. There was more action, more character growth, and I'm really, really excited to see where things will go in Requiem. The pacing was excellent and unlike most books that go back and forth between two different time periods, I was able to keep up without having to go back and re-read each time period separately (yes, I've had to do it before for other books).

As for our new boy, I think it's a little too soon for me to give my opinion on Julian Fineman though as he's really just beginning to come into his own--having lived as the poster boy for the DFA up until this point. Then there's Raven who I'm guessing we haven't seen the last of and she's sort of a mother (and sister) figure to Lena and the rest of their group in the Wilds. You'll definitely learn about her during Pandemonium and well, I just couldn't help but like her. She puts up a brave front for the sake of their group, but there are definitely moments when she's worried for her group in a way that makes you think that she doesn't want to lose anyone else.

In short, I'd definitely recommend Pandemonium to you--under the condition that you've read Delirium. The plot is definitely moving along and it's not as focused on the romance--or at least, in my opinion--although the next book should definitely have you covered on that front.


Pandemonium by Lauren Oliver
Publisher: Harper, an imprint of HarperCollins
Release Date: February 28, 2012
Edition: ARC
* Received for review via publisher.
Posted by Kristin @ Beneath Shining Stars at 4:28 AM