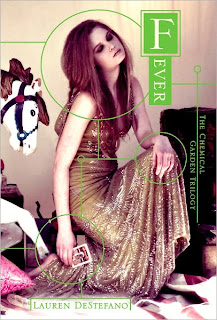 If you haven't read Wither yet, you'll want to go and read it before you read my review of Fever--I mean, unless you don't mind spoilers and if that's the case, feel free to read on.

If you're expecting a lot of romance in Fever, I'm sorry to say that you'll be somewhat disappointed. Yes, both boys are present, but the focus is really not on the romance; if anything, it's on Rhine's search for her brother, Rowan, and Vaughn's search for her. Granted, there's a lot more going on in Fever than just that.

I almost feel like I was lulled into a false sense of security during the first half of Fever and it wasn't until they reach Manhattan that the wheels really began to turn. I'm still clutching my head over the whole Deirdre thing and the other thing that is going on at the same time as the Deirdre thing--incredibly vague, I know, but you'll know what I'm talking about when you reach that point. I also feel like a terrible person for saying this, but I loved the way that Linden reacts to everything and it's really made me excited for the next book--this may also have something to do with Gabriel and even Rowen but again, you'll see what I mean when you get there. Have I mentioned the creepy carnival? Because it is definitely still milling around in my head (yeah, I have that particular setting stuck in my head right now).

Vaughn is definitely up to something horrific in Fever and I think it's impossible not to know that much. He's definitely out to find Rhine and more or less, there's two reasons behind this--or so I'd like to think. Yes, half of it is Linden related but the other half? I'll keep my lips zipped so that you find out on your own. To be honest, I wasn't expecting it although it does make a lot of sense now that I think about it.

Fever was definitely a page-turner and although it did start off slowly, the ending was definitely worth it. If you're expecting a lot of romance in Fever, you'll probably be disappointed but things are definitely looking up for the next book. Would I recommend Fever to you? Definitely--granted, I suggest that you read Wither first if you haven't done so already.


Fever by Lauren DeStefano
Publisher: Simon & Schuster Books for Young Readers, an imprint of Simon & Schuster
Release Date: February 21, 2012
Edition: Hardcover
* Purchased on my own.
Posted by Kristin @ Beneath Shining Stars at 4:31 AM