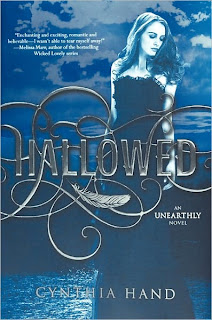 I can't really summarize Hallowed for you. Well, I can tell you that there's a funeral, some serious secrets come out, and things on the Christian and Tucker front are... interesting. I think that's my favorite part about Hallowed--seeing as how I was all about Tucker during Unearthly. Seriously, I might've been a diehard Tucker fan during Unearthly, but I couldn't help but like Christian in Hallowed. Character relationships definitely play a huge role in Hallowed and you have no idea how I wish I could say more than that. Needless to say, Hallowed is an amazing follow-up to Unearthly and you shouldn't even need to think about reading it, because it's great.

Jeffrey is bitter throughout most of Hallowed and when you find out the reason behind it, well, let's just say that my mind was blown. Maybe I'm the only one who didn't see that coming, but I can honestly say that I was surprised. Then there's Clara who continues to face challenges... really big challenges. I am dying to tell you more than that, but in the spirit of being spoiler free, I shall say no more. You'll meet some new characters in Hallowed as well and it's hard to dislike Billy (who, for the record, is a woman). She's not the only new character that you'll meet, but again with serious spoilers!