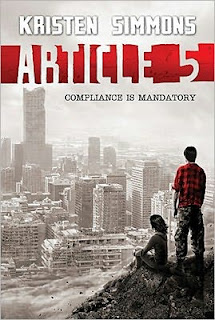 I'm of two minds when it comes to Article 5. On one hand, I absolutely loved it and spent most of the book flipping pages like a madwoman. However, at the same time, Ember (the main character) drove me insane. She's irrational and hysterical at several points during the book and they get her in trouble... frequently. On the upside, she should be a different girl in the next book. I am seriously hoping that Ember will gain some common sense and toughen up... and well, stop running headfirst into situations as well as going with the first plan that comes to mind. *shakes Ember*

Chase Jennings on the other hand? I loved him. Seriously, I may have a crush on the boy. He was Ember's childhood friend, crush, and now? Now he's a far cry from who he used to be. He's a soldier and a member of the Federal Bureau of Reformation; perhaps more importantly, he's one of the soldiers who comes to take Ember's mother away for being in noncompliance of Article 5 of the Moral Statutes. Trust me, he'll grow on you.

Also, it needs to be said that the world that Article 5 is set in seems like a frightening place. And by frightening, I mean ridiculously so. If you violate one of the rules, you'd be taken away and if you're unlucky (most are), they'll kill you. The reformatories are equally as frightening and they'll keep you there until you're eighteen; that is, if you survive that long. On the upside, there is a resistance and as the government continues to enforce their rules (that they continue to edit) the resistance is definitely growing in popularity.

In all, Article 5 is definitely a page-turner but Ember can drive the reader crazy for a good portion of the book. Chase is definitely my favorite character out of Article 5 and there's definitely some romance present without going overboard--in my opinion. Ember does begin to redeem herself towards the end but I think it'll take the second book to convince me that she's really changed. This is a book that I'd encourage you to form your own opinions about as I can definitely see some people enjoying it, if they can get past Ember's stunts.