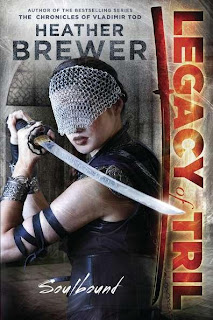 The Legacy of Tril: Soulbound by Heather Brewer

Summary via Goodreads:
What's worse than being blackmailed to attend a hidden school where you're treated like a second-class citizen? How about nearly getting eaten by a monster when you arrive? Or learning that your soulmate was killed in a centuries-old secret war? And then there's the evil king who's determined to rule the world unless you can stop him...

Meet Kaya, a young woman with the power to heal and the determination to fight. But struggle as she will, she remains tied to three very different men: a hero who has forsaken glory, a tyrannical ruler who wants to use Kaya, and a warrior who's stolen her heart. Kaya learns the hard way that some ties can't be broken...and blood is the strongest bond of all.

Why am I looking forward to The Legacy of Tril: Soulbound? Because what part about that plot doesn't sound amazing? (And I'm hoping that they keep the cover like this because quite frankly, I like it, I like very much.)

The Legacy of Tril: Soulbound by Heather Brewer is published by Dial Books, an imprint of Penguin Group and its expected publication date is July 5, 2012.

Posted by Kristin @ Beneath Shining Stars at 11:33 PM