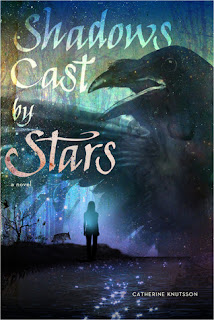 Summary via Goodreads:
Two hundred years from now, blood has become the most valuable commodity on the planet - especially the blood of aboriginal peoples, for it contains antibodies that protect them from the plague that is ravaging the rest of the world.

Sixteen-year-old Cassandra Mercredi might be immune to the plague, but that doesn't mean she's safe. Government forces are searching for those of aboriginal heritage to harvest their blood. When a search threatens Cass and her family, they flee to the Island, a mysterious and idyllic territory protected by the Band, a group of guerilla warriors, and by an enigmatic energy barrier that keeps outsiders out and the spirit world in. And though the village healer has taken Cass under her wing, and the tribal leader's son into his heart, the spirit world is angry, and it has chosen Cass to be its voice and instrument...

I'm pretty sure by the time that you've read the summary and seen the cover, you understand just why I'm waiting on Shadows Cast By Stars and if you don't, I'm going to assume it's because you don't think it's your cup of tea--which is fine. However, I can't wait for it to come out! Love the idea of blood being a highly valuable commodity.

Shadows Cast By Stars by Catherine Knutsson is published by Atheneum, an imprint of Simon & Schuster, and its expected release date is June 5, 2012.


p.s. Yes, it's been pretty quiet on the blog again--but that's because I've been forcing myself to write for NaNoWriMo! Hopefully tomorrow I'll be able to take some time to blog.
Posted by Kristin @ Beneath Shining Stars at 12:13 AM