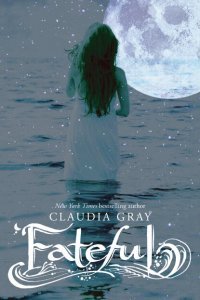 Summary from GoodReads:
It's about a servant girl named Tess in 1912, who wants to escape from the house where she works, and most particularly the lecherous young lord of the manor. But that's not her biggest problem. While on a voyage to America, where she plans to escape and start a new life, she meets Alec, who's ruggedly handsome, fabulously wealthy, intelligent and yet so clearly troubled that she'd rather not fall for him, but she does. That also is not her biggest problem. Alec, it turns out, is a werewolf ... one cursed to change every night, unless and until he surrenders his independence and joins the Brotherhood, a pack of violently misogynistic werewolves who have been tracking him for months. You'd think that would be their biggest problem, wouldn't you?

But no. Their biggest problem -- though they don't know it yet -- is that they're aboard the RMS Titanic.

-----
Why am I looking forward to Fateful by Claudia Gray? Love the time period, fascinated by the RMS Titanic (and its history), and werewolves! Love it when the paranormal and historical fiction genres overlap. Plus there's romance! Taking all of that into account, it's impossible for me not to want to read this book!

Fateful by Claudia Gray is published by HarperTeen (an imprint of HarperCollins) and its expected publication date is September 13, 2011.


Also, I know, I know, no Armchair BEA post for me today! Instead you'll be getting this and later on I'll be posting a review (of Beauty Queens by Libba Bray). Not to worry though, I'll be doing an Armchair post on Thursday and Friday too--as well as stopping around and at least reading through as many of the interviews as possible. With that said, what are you waiting on this Wednesday? :D
Posted by Kristin @ Beneath Shining Stars at 1:00 AM