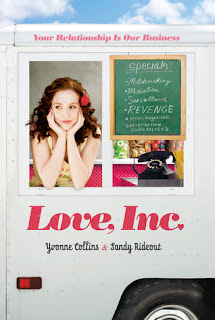 Summary from GoodReads: Zahra, Kali, and Syd would never have met if their parents' marriages hadn't fallen apart. But when the three girls collide in group counseling, they discover they have something else in common: they've each been triple-timed by the same nefarious charmer, Eric, aka Rico, aka Rick. Talk about eye-opening therapy.Cheerful, diplomatic Zahra is devastated. Rico had been her rock and sole confidant. How could she have missed the signs? Folksy, flirtatious Kali feels almost as bad. She and Rick had only been on a few dates, but they'd felt so promising. Hardened vintage-vixen Syd is beyond tears. She and Eric had real history... Or so she'd thought. Now all three girls have one mission: to show that cheater the folly of his ways.
Project Payback is such a success, the girls soon have clients lining up for their consulting services. Is your boyfriend acting shady? Dying to know if your crush is into you? Need match-making expertise? Look no further than Love, Inc.


My Thoughts:
Zahara Ahmed-MacDuff's parents are separated and Rico has been the one thing--well, guy--holding her together. When she's sentenced to do group therapy with other teens that are in her situation (parents divorced or separated), she meets Kali and Syd, two girls who share one thing in common with Zahara--Rico who is also known as Rick although his real name is Eric. Yes, he's been playing all three of them along and once they find out, they decide to get revenge. Although originally intended to just teach Eric a lesson, they decide to make a business out of it. Want to know if your boyfriend or girlfriend has been cheating on you? Need someone to negotiate a break-up? Look no further than Love, Inc. However, the real question is whether or not the girls will be able to move on after the whole Rico/Rick/Eric fiasco.

I love that Zahara is a baker and dreams of having her own television show--she's already planned to entitle it as "The Sweet Tooth"--and that both Kali and Syd are also very unique characters. More importantly, if it hadn't been for group therapy, they wouldn't have met and thus wouldn't have become such an amazing trio. I think that my favorite part about Love, Inc. would have to be not knowing who Zahara would end up with until--roughly--the last fifth of the book. Was it going to be Andrew? Riaz? Brody? The book really builds and in my opinion, everything that was mentioned in the book as well as the minor characters played an important role in bringing the storyline together. Although I will force myself to admit that I didn't care too much for Riaz and that I felt that Andrew's reaction was a little strong. I won't tell you more than that though as it could be considered spoilers--and well, you know how I feel about those. However, I really did enjoy reading Love, Inc. and if you're looking for a light read, this might be it.