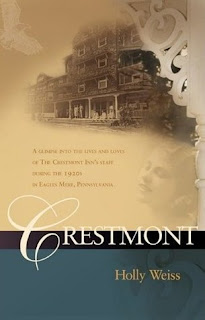 Summary from GoodReads: "A dream, after all, needn't be fueled by particulars, only by desire." So notes main character, Gracie Antes, in CRESTMONT, a historical fiction gem set in the 1920s. Determined to take control of her life, sheltered Gracie Antes leaves her unhappy home in 1925 to pursue her dream of a singing career. On her way to the big city, she accepts a job as a housemaid at the bustling Crestmont Inn. Once there, Gracie finds a life-changing encounter with opera singer Rosa Ponselle, family she never imagined could be hers, and a man with a mysterious past. Relive the 1920s with a colorful cast of characters. Discover with Gracie that sometimes we must trade loss for happiness. Set in Eagles Mere, Pennsylvania, the story is interwoven with details about the town, the rich history of The Crestmont Inn, and the family who passed ownership from one generation to the next. Many attempts have been made to explain how the mountaintop lake nestled in this tiny town came to be. Crestmont gives a new twist to an old Native American legend, setting the tone of grace around which the story is built. Let the period of the Roaring Twenties spark your interest with its unique social mores, fashion, jazz, and yes, a little bootlegging thrown in for pizzazz.

Where do I begin? Crestmont strikes me as the sort of book that you want to devote some time to. Not because it's slow or because you won't want to read it, but because there's a lot of details to take in. The author, Holly Weiss, certainly did her research and yes, the book is based around the history of the actual Crestmont Inn in Eagles Mere, Pennsylvania although this is a historical fiction. The story is told in third person and includes the tale of why the lake was named Eagles Mere, William Warner's plans for the inn, and then Gracie's story kicks off once William Warner's daughter (and said daughter's husband) take control of the inn.

Gracie's original plan was to go on the road and sing; to get away from her home and her feelings towards her sister's new husband. However, as she'll need to fund her trip to Chicago (for it's where she wants to go), she answers an ad in the paper advertising for help at the Crestmont Inn--originally answering the ad just as a way to make money. From there, she meets the bevy of characters who both work at the inn and the typical summer guests. She feels more at home at Crestmont and eventually, she meets the guy whom later in life, she ends up marrying. I think that's about as elusive as I can be about those details.

Asides from coming to Crestmont, I think that Gracie's meeting with Rosa Ponselle (an opera singer) is a major moment for her--not only because she's pretty much living Gracie's dream, but because Rosa gives Gracie some lessons which help bolster her self confidence even more (although Mrs. Woods was doing a fine job of that to begin with). If there was a lesson to be taken away from Crestmont, I think that it would be that you don't always end up where you thought you'd be in life (ie. you might think you want to do one thing but end up doing something else entirely). Personally, I liked Crestmont due to the heavy helping of history and well, I did like Gracie--though okay, naming one's clothes seemed a bit strange to me (but that's probably just me).

Posted by Kristin @ Beneath Shining Stars at 3:48 AM